Home › Blog › What You Need To Know About Acrobat Ants

What You Need To Know About Acrobat Ants

Acrobat ants are found all around the United States. They get their name because of the way they are able to acrobatically raise her abdomen above their head, particularly when they are disturbed. From an aerial view, the abdomen is shaped like a heart. There are several species of these acrobat ants found within the country. They are small and most are under 5.4 mm in length. If they are disturbed, they may also email an unpleasant odor. 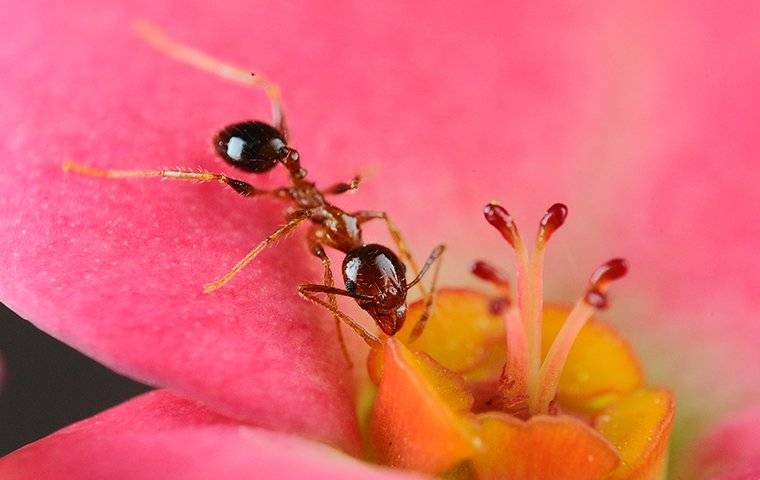 Acrobat ants are predominantly found outdoors where there is moisture, including in stumps, under stones, within rotting logs, and even under wood piles. If they do invade a home, they will nest in the damper areas, such as the foam sheathing of siding, and even near a leaking skylight.

Homeowners need to be aware of the dangers that can arise by having acrobat ants in the house. They nest in similar areas as carpenter ants as well as termites, and will often be in the same nest that these insects have previously damaged. They will clean out the galleries that have been left behind by the other insects, and push the dirt and wood scraps out. Homeowners may find the debris and make the assumption that there is an active infestation of termites, when reality it is actually acrobat ants.

The normal diet of an Acrobat ant includes insects, as well as honeydew, which is a sugary waste that is excreted by aphids and other sap feeding insects. Due to the diet of these ants, they will protect aphids because of what they produce. When ants enter a home, they are generally going to go after meat and sweets.

Acrobat and workers will enter a home in a variety of different ways. Some will make a trail across the ground, while others will use construction gaps as well as door thresholds. Workers may also decide to follow shrubs and trees limbs that touch the house, which is why it is important to avoid landscaping that lies on the roof.

Some of these ants have even found their way into homes by following utility lines or pipes. This means it is important to follow the line of ants whenever seen in order to find out how they are entering the home. This will make it easier to know how to make the repairs.

There is nothing unusual about the biology of Acrobat ant in comparison to many of the other and species that are out there. They will produce winged males as well as females known as swarmer’s, which are responsible for nesting and mating. The mated females will disperse and become queens of their very own colonies at one point or another. Queens will then lay eggs, tended by the workers, and the reproduction cycle continues.

There are various ways to learn of whether you have an Acrobat ant infestation. They are capable of nesting inside a variety of insulated spaces and buildings. One of the most noticeable signs is that there are trails of ants because they are foraging for resources. Another sign is to find debris that has been deposited on the outside of their nest. This can include foam insulation, pieces avoid, and even dead ants near the nest.

When there are many Acrobat ants around the home, they will generally be no more than I minor nuisance. They will be found on the property, but typically not in the home. They may be found in firewood, logs, and even thick layers of leaves. When the acrobat ants do make it into the home, they can be found around windows, porches, downspouts, and related areas. Since they are located around the moisture, they can be found in any area around the house, particularly where there is wood. They will do minimal damage to wood, unlike termites where they can be quite damaging.

The Acrobat ants may also bite if the colony of the ants are disturbed on a constant basis. This means that the area needs to be cleared as quickly as possible to avoid any family members being bitten by the ants. Some people have more allergic reactions to the ants than others. When they are disturbed, there is also an owner that will be produced, which can be quite offensive, particularly if there is a large colony of ants within a small area.

One of the best ways to learn about the presence of Acrobat and is with a thorough inspection. A pest control company can come out and provide a full inspection to find evidence of where a nest is. They will be able to look for all of the different signs, and identify if there are multiple colonies in place. When ants can be found on the move, it can also help to lead the pest control company to the food supply as well as to the nest.

Nests can often be difficult to locate, which is why it is often easier to hire a pest-control professional. They will be able to treat the infestation appropriately. They may also make recommendations in terms of trimming shrubs and tree limbs to make it harder for the Acrobat ants to invade the home. Openings around utility lines and pipes should be caulked, and firewood piles should be moved away from the home. Whenever there is moist wood, such as a tree stump, it should be removed to avoid giving the ants a nesting site.

If you think that you are having a problem with Acrobat Ants or any other types of ants, call Alliance Pest Services today for a free estimate to solve all your ant problems.