Home › Blog › What To Do About Bats On Your Monmouth Property

What To Do About Bats On Your Monmouth Property

Bats are misunderstood creatures. The bats in New Jersey primarily eat insects, with a few small rodents, small birds, fish, and amphibians thrown in for good measure. A single brown bat can eat up to 3,000 insects in one night, while nursing mothers can eat up to 4,500 insects a night! 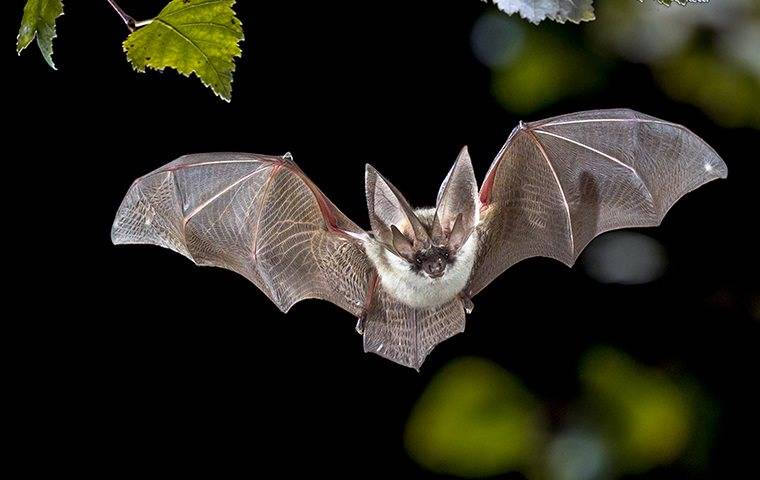 There are six species of bats that live in New Jersey, year-round. They are active during the spring, summer, and early fall and hibernate during the winter. Three species are migratory, staying in the area during the warm months and migrating south for the winter. All of these species are insectivores. The only three species of bats that consume blood live in the tropics and feed on cattle and other large mammals, not humans.

While some bats hibernate in caves, they tend to roost in a different place during the warm season. Some of them roost in trees in the foliage, beneath the bark, or in holes. Others choose to roost in or on buildings. Bats may get in attics or wall voids through holes in the roof or eaves. Females have one pup, who will stay in the roost by its mom and nurse until it can fly. Disturbing bats when they have pups will cause the females to abandon their pups, who will probably die.

Although healthy bats are shy and do not attack people, they can cause problems in your yard or house. A small percentage of bats have rabies, and it may make them aggressive or so sick they cannot fly. Do not ever pick up or corner bats, especially if they are on the ground. The big brown bat is large enough to have a painful bite if you do corner it. Call animal control for downed bats. Even if the bats are not rabid, they urinate and poop before they fly each night. That builds up and becomes a health hazard. When guano builds up, it can be infected with Histoplasmosis, which can cause a flu-like illness.

It is illegal in New Jersey to kill bats or harm them in any way. Animal control officials and pest control technicians cannot kill bats, either. Alliance Pest Services can exclude the bats from your home and outbuildings when it is not nursing season (May 1-July 31). When you contact us about bats, we will send a trained technician out to do a thorough inspection inside and out. We will then go in the attic and identify the species of bat and find where they are getting in. We will put a one-way door in that area that will let the bats out but won’t let them back in. Finally, we will clean up after the bats so there are no health issues. Call Alliance Pest Services today and get rid of your bats.