Home › Blog › What Are Winged Ants And Why Do They Swarm?

What Are Winged Ants And Why Do They Swarm?

Winged ants are a common sight in summer. Great swarms of winged ants will appear suddenly from existing ant colonies and fly around. It is during these swarms that the ants will mate and the resulting new queens are the source of new colonies. If you see a swarm of what you believe to be flying ants during the spring, contact a pest control specialist because ants rarely swarm in spring, but termites regularly do. While, by and large, the swarm of winged ants will cause little to no damage to your home, termites are another matter entirely. 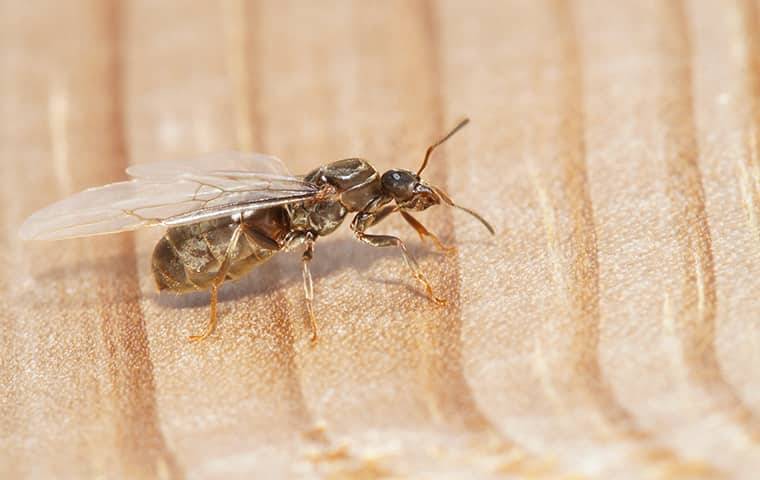 Heavy rain is required before winged ants will swarm. Although in some cases you can see a swarm of winged ants following a single day of heavy rain, it is far more common for there to be rain for three to five days before the winged ants will emerge from their colonies. This is yet another way you can distinguish between winged ants and termites. If you see swarms of flying insects and there has not been heavy rain in the preceding days that is a good indication that you have a termite situation.

Winged ants are often confused with termites. Here’s how you can tell the difference. Aside from the previously mentioned difference in season and the need for rain on the side of the ants, the bodies, wings and antennae are different. They both have two pairs of wings, but they are shaped differently. Termites have two straight, equally sized sets of wings, while the wings of ants are more angled and the second set of ant wings are considerably smaller. The antenna of an ant are bent, while the termite’s antenna are straight. Perhaps the easiest way to tell the difference at a glance is the body shape. The ant has a small, defined waist, while the termite gets broader from head to tail.

The swarm of winged ants is entirely for mating. When a colony has reached the maximum size that can be supported in the current environment, they will produce winged ants that leave the colony, mate and then disperse. The mated females will attempt to set up new colonies. Most, however, fail to do so and die without creating new colonies. Those that succeed use the unmated winged ants as their new worker ants to help establish a new colony. The winged ants represent extraneous members of the existing colony, not the exodus of the colony to a new location.

In most cases, seeing a swarm of ants in or near your home is not indicative of future ant issues. They will fly to a location that is far enough away from the original colony and other colonies that they do not need to compete unduly for resources to survive. On the other hand, if you do not have an existing colony in your yard, they may attempt to settle in your yard. And if they find a place to start a colony inside your home (inside the walls, for example) you could have a serious problem on your hands that will require professional treatment.

Ants will swarm around high points, like trees or chimneys. This is because they are seeking to avoid the many issues and predators that come from being on or near the ground. I also like to think that they’re enjoying the use of their wings, since they generally only get a day or so with wings before they fall off and they have to return to a life of ground living.

It’s best to avoid a swarm of winged ants. Although they aren’t like wasps that have stingers and cannot directly harm you, a swarm of any kind can cause you discomfort and unpleasantness, as they could enter your mouth, nose, or ears. Also, it is always advisable to stay away from groups of mating creatures because they become distinctly annoyed when their amorous activities are interrupted, and ants are no exception. It’s best instead to note the location of the ants and try to determine where they came from.

Most colonies only produce winged ants several years apart. This is because the colony needs to establish itself and maximize their available space without running out of resources. This takes time and if their resources are threatened or removed, it could take even longer. Producing winged ants causes a depletion of their workers and resources that they have to replace before swarming again.