After the cold winter months, a lot of homeowners find themselves suddenly swarmed with termites and winged ants. The unwelcome visitors take advantage of the warm weather to reproduce and multiply, making a nuisance of themselves. It’s not surprising that with so many shared similarities many people confuse termite swarmers and winged ants. To the untrained eye, they both look eerily similar. However, both pests do have distinct differences. It is worth knowing some of these differences so you know how to best arm yourself against these little critters. 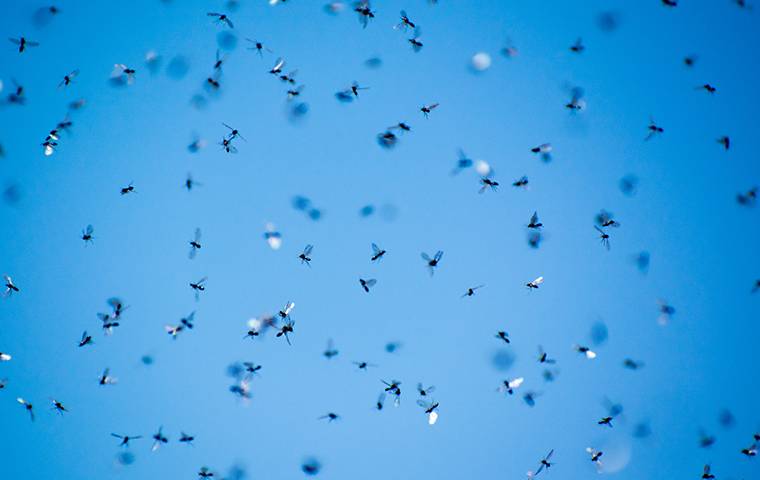 Termite swarmer wings (also known as antennae) are straight, of equal length and both back and front wings can be of two colors either the wings are transparent or they are milky in color. The antennae also display several veins, a lot more than in winged ants. Termite antennae are also almost twice the size of the insect’s body while the antenna of winged ants is directly proportional to the size of the ant. The bodies of termite swarmers are solid without any cinching at the waist i.e. there are no clear distinctions between the head, thorax, and abdomen. There are dark brown or black versions of the termite swarmers.  And termite swarmers drop their wings prior to mating.

Winged ants, on the other hand, have wings that are elbowed. The wings also have a brown tint to them and sometimes they are clear. Winged ant antennae aren’t of the same length. The veins in ant wings are also far fewer compared to those in termite wings. The front wings tend to also be much larger than the pair behind them. Winged ants display the typical insect segmentation of head, thorax, and abdomen. This is clearly seen in the fact that their torsos are pinched at the waist. Winged ants’ bodies are characteristically reddish, brown or black.

Winged ants are great in the sense that they do not eat wood and as such do not do structural damage to wooden structures. In contrast, termite swarmers feed on wood and tend to make their home in dead trees, wooden stumps and lumber. This poses a serious problem to houses made out of wood. So being able to distinguish between one and the other is critical in this case.

Termites don’t like to fly around where they are easily seen. They like living in obscurity. So chances are if you see insects crawling around your home, they most probably are ants and not termites. Another thing to keep in mind is the fact that these two insects, though very similar, don’t tend to be found together in the same location. You will either have a termite infestation or an ant infestation but rarely will you ever experience both at the same time.

Termite swarmers can be problematic because not only do they live in large colonies but they also feed on wood, cellulose products, and paper. This makes them dangerous when they move into any house, especially if they make themselves at home in a crawlspace such as the foundation area of the house or the attic. The minute you suspect a termite infestation you should not hesitate to call your local pest exterminator.

Winged ants aren’t any better and are also a nuisance. They will eat all your crumbs from the floor, search out seeds, smaller bugs and even nectar to feed upon. Because they also move in large colonies, they are considered pests that need to be eliminated as soon as possible. Failure to eliminate them will only lead to their multiplication!

For ants, the first difference is that they have an extra stage in the life cycle which is pupa formation. A typical winged ant life cycle consists of an egg stage, larva stage, pupa stage and adult phase. Ants can be subdivided into two major categories which are worker ants and queen ants. Worker ants can live for several months and queen ants can survive for many years.

Both of these pests thrive in warm weather, where conditions are ideal for multiplication and reproduction. Both fertile termites and winged ants will leave the nests to go and mate and set up new colonies elsewhere. Once male and female termites have mated they lose their wings. They continue to live in the new colonies they have established until they die. For winged ants, the male will die once it has finished mating with the female. The female winged ant after mating will lose its wings but will continue to live.

If you happen to see one of these flying insects in your home, it might indicate that you may have an unwanted ant or termite nest hidden somewhere out of sight that needs immediate removal. It may be time to call in some exterminators or fumigators. The sooner you get the nest removed the better. If you have wooden structures as part of your house’s foundation you should be doubly worried and call for immediate help because as mentioned earlier, termites do eat wood and can do serious damage to any wooden structures they might make a home in.

Well, now that you know these differences it shouldn’t be too difficult to spot any one of these pests the next time you come across one. Contact Alliance Pest Services today to for your free termite inspection.