Home › Blog › Ticks and The Damage They Cause

Ticks and The Damage They Cause

Ticks are under the scientific classification known as Arachnida, which is a class of joint legged invertebrate like mites, spiders, scorpions, etc. They have been in existence for 90 million years according to fossil records. They are small arachnids with a complex life cycle, and they need blood meals to complete this cycle. This life cycle includes; nymphs, male tick, female ticks, eggs, and larvae. 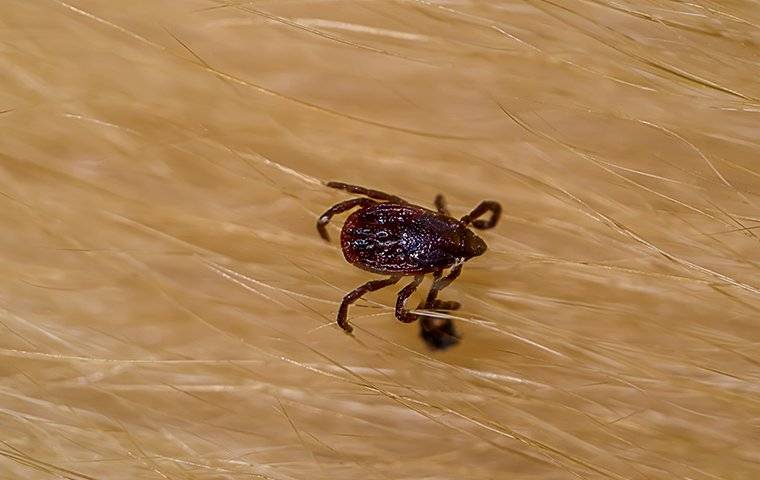 The Life cycle of the Tick

The female tick lays a maximum of 8000 eggs all at once then dies. The eggs which are brown are then hatched into Larva after a period of 3 weeks.

The Larva of a Tick has a pair of three legs and feeds on a host (blood meal) before it can become a nymph. It takes a period of 3 to 13 days before a Larva becomes a Nymph.

The Nymph has a pair of four legs which is the same as the adult tick although it is not yet an adult. The Nymph has to feed on a host for 4-8 days after which they develop into an adult Tick.

The life cycle period from egg to adult tick takes a period of 2 months to complete. Even after the adult stage the tick still feeds on a host, after the female host has fed on a host, she looks for a place to digest the blood meal and lay her eggs before she dies.

There are over 800 species of ticks all over the world, but only a few of them are harmful to health because they transmit diseases. Ticks are divided into two main families, known as; the Hard tick (Ixodidae) and the soft tick (Argasidae).

Soft Ticks are also known as soft shell ticks. They can live for a decade but take two years to fully mature. They pass through three stages of development and need numerous blood meals for each stage. The skin of a soft-shell tick looks leathery, and it stretches during a meal. The mouth parts appear hidden because it is located on their underside.

The male and female soft-shell ticks are the same color and size. They are nocturnal, and they can stay a year without a blood meal before starving to death. After each blood meal female, soft shell ticks lay multiple eggs.

This type of tick can be found in nests and animal habitations. Here are some popular, soft shell ticks;

These types of tick can be found in rodent infested homes or areas. They are not easily felt or seen by the host who makes them very deadly, and most of them can live for as long as a decade.

Common fowl tick can be dark brown or reddish brown, and they are mostly found wherever turkeys and chicken are housed. There is a higher chance of finding poultry tick where poultries are raised if the poultry house if specifically made of wood.

This type of tick is also known as hard shell ticks. The females are usually larger than the male and they most times have different colors. They go through three stages of life; Larva, nymph, and adult. The life cycle of a hard tick can take 90 days to 3 years to complete. They need one blood meal for each stage of development, and they might take a maximum of 3 days to finish a blood meal before they can leave the host.

The mouth parts of the hard ticks are visible unlike that of the soft tick. These ticks are diurnal, and due to that, they feed on the host only during the day. The female hard tick dies immediately after laying a large batch of 3000 to 8000 eggs.

Hard shell ticks are most times found in areas dominated by weeds and grasses. Here are some common hard ticks;

These ticks transmit spotted fever strains to humans. They are light brown and are commonly found in rodents, livestock, and birds.

These Ticks are very dangerous because they are responsible for transmitting and spreading babesiosis, Lyme disease, and Anaplasmosis. They have a reddish-brown coloration and have black legs as their name implies.

The damages Ticks cause

Ticks are known for their damage to human health and animal health. When a tick feeds on a human, they transmit salivary toxin which causes paralysis. In most cases, the paralysis can be reversed when the tick is removed from the body of the host.

Other Major Tick-borne disease includes; Rocky Mountain spotted fever and Lyme disease. These diseases are transmitted from the tick to the host after the tick feeds for some hours. Some characteristics of the Lyme disease include; large red rash, flu symptoms, Joint pains, etc. and the characteristics of Rocky Mountain spotted fever includes; rash on the forehead, wrists, and ankles two feeds after infection. Both diseases can be treated successfully with antibiotics at the early stage.