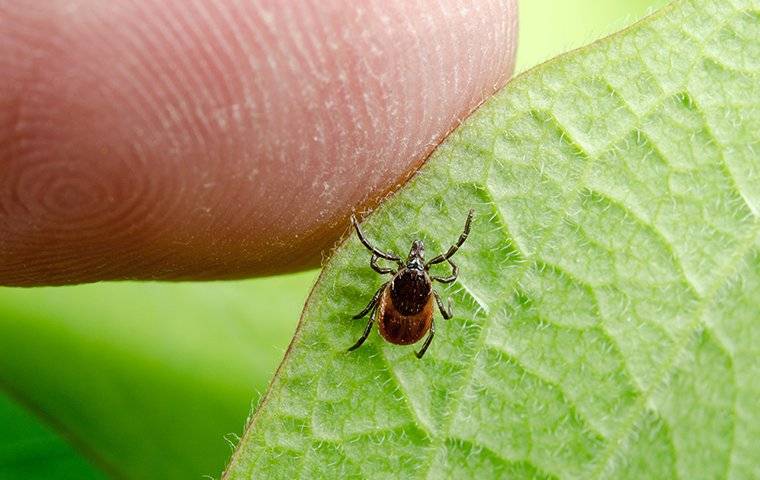 Most ticks belong to the Ixodidae family, but they vary in color and size by species. Adult ticks range in size from smaller than a sunflower seed to over one centimeter long when engorged with blood.  The larvae of a tick can be less than one millimeter in length.  Ticks are often found in highly vegetated or wooded areas.  Some species require moisture to survive.  Males and females of most tick species feed on the blood of birds, mammals, and reptiles.

A tick’s lifecycle has four stages: an egg, a larval, a nymphal and an adult.  During their larval stage, ticks only have six legs.  Once they reach the nymphal and adult stages, the tick has eight legs.  Ticks consume blood for nourishment during all stages of their lifecycle.  A tick can carry pathogens—which cause diseases in other animals—throughout the stages of its lifecycle.

Common problem ticks in the Northeast area include the American dog tick, deer or blacklegged tick and the lone star tick.

Also known as a wood tick, the American dog tick is a hard tick which can be found around and on livestock and domestic animals as well as where bushes, grasses, and other plants are accessible to humans.  American dog tick females can reach a length of approximately five millimeters when they reach adulthood, while males can measure about 3.6 millimeters.  While both males and females have patterns on their bodies which are grayish in color, only females can reach a length of up to 1.5 centimeters.

American dog tick females will detach themselves from their hosts when ready to lay their eggs in order to locate a suitable location.  Female ticks engorged with blood can often be found in potted plants or beneath dead leaves in gardens.  A single female American dog tick can lay 5000 eggs at one time.

Larvae set off in search of small host mammals, such as mice, as soon as they emerge from the egg.  The larvae feed until they become engorged with blood and then fall to the ground where they develop into nymphs.  American dog ticks can fully develop within three months in ideal climates and temperatures, but may otherwise take up to two years in less than ideal conditions.

During their larvae and nymphal stages, juvenile blacklegged ticks like to feed on smaller host mammals, where they contract infections they later will pass to other hosts.  Even as adults, blacklegged ticks rarely feed upon larger mammals such as cattle or deer.  Humans unfortunate enough to be bitten by blacklegged tick females are considered accidental hosts.

Blacklegged ticks feed on their hosts by inserting their mouthparts into the skin and sucking blood as through a straw.  Blacklegged ticks can feed over a week if they remain undetected.  Prompt detection and careful removal of attached ticks can prevent the spread of diseases that ticks carry, but prompt medical attention should be sought if unusual symptoms occur or if the tick is believed to have been feeding for an extended period of time.

A common tick species in the eastern United States, as far west as Illinois, is the Lone Star tick.  Like most other tick species, the lone star tick feeds on warm-blooded mammals, including humans.  These ticks only measure around three millimeters in length and are brown in color, causing them to often be confused with.

Measuring only about three millimeters in length, lone star ticks are brown in color and are confused with deer ticks, a species known for transmitting Lyme disease.  Lone star ticks are unique in that lone star tick females exhibit a white spot on their backs in adulthood.  A lone star tick’s bite is not painful, resulting in many victims not realizing they have been bitten unless they experience an allergic reaction, which occurs in rare instances.  Lone star ticks transmit diseases such as ehrlichiosis, Rocky Mountain spotted fever, and tularemia.

As with other ticks, the mouthparts of a lone star tick are embedded in the skin of its host, making it vitally important to ensure the mouthparts are carefully removed with the rest of the tick.  Tweezers are recommended for tick removal, or you can buy a special tick removal tool which ensures the tick is removed intact.  Ticks must never be crushed during removal, or disease causing pathogens can be forced into the open wound.

Ticks are usually visible and easily detected, but they may not be discovered until after they have caused irritation and sickness.  The sooner a tick is removed, the less likely it is to transmit pathogens to the host.  Pulling socks up over pant legs when traversing dense vegetation, using repellent, checking oneself thoroughly after being outdoors where ticks may be present, and immediately washing clothing worn in outdoor areas  known for high populations of ticks are all good preventative actions which can reduce the change of contracting a tick-borne illness.  Precautions when removing ticks should be the same as those listed above for the Lone Star tick, regardless of species.

Secondary signs of a tick bite (should the tick have detached) can include redness and swelling at the bite location and medical symptoms from the diseases ticks have transmitted.  The signs and symptoms of tick-borne illness can vary and are best diagnosed by a physician.  Contact Alliance Pest Services today your local pest and tick control professional to learn how you can reduce tick populations around your home and property.