The little black ants' (monomorium minimum) origins are within the continent of North America. They find lots of ways into households often. They come to consume meats, honeydew, sweet food, vegetables and other insects. They will eat most of what people eat. They devour the sweetness out of plants so they like organic matter also. 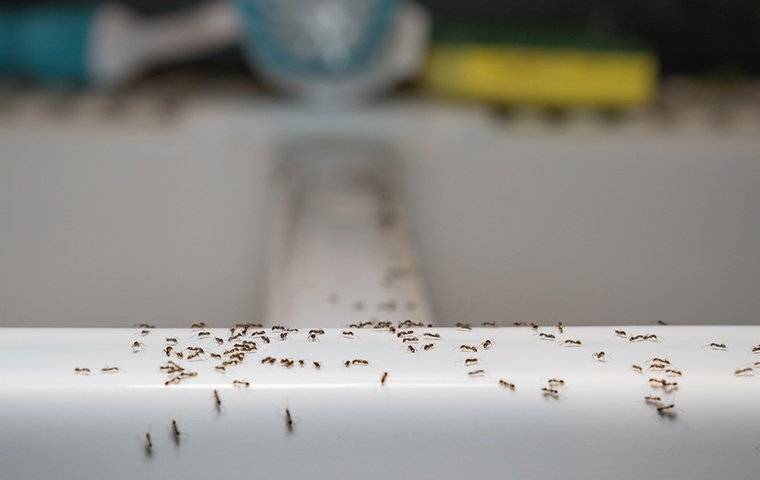 They Will Pinpoint Places to Live

The little black ants create colonies in the wooded parts of rooms and buildings. They also dwell in soil, slabs of concrete, close to foundations, and under rocks. The small cavities of the soil let folks know that the ants built places to live underground. They will also make nests in the walls, the veneer of bricks, and under the doorway carpet.

They Are In the US Too

In the US, the little black ants can be found almost anywhere. The folks there have issues with the little black ants just like almost every other country. They do what they can to get the ants out of their dwellings after surveys are done regarding the interior and exterior of residences.

The Workers Are All Females Who Do Not Reproduce

The workers of the colonies are females are not able to reproduce. Those workers come from the hatched eggs that were not fertilized, so they become sterile. Some of their jobs are to guard the queens, other ants, and the aphids within. They also nurture and care for the babies. The workers help build and fix the nest and they will spit on the walls of to harden those. They battle foes and do most of the work. They provide care for the queens.

There are some ant communities in Europe that each have 100's of queens. The queens multiply and have kids so quickly.

The Male Ants Get Plenty of Vacations

The little black ants that are males do no labor. They cease to exist after they come together to breed with queens. The couples can perform copulation in the center of air during the spring and summer seasons.

The Queens Are the Bosses

The queen forever and constant mission is to put down as many of eggs gently, after she sets up the colony. She gets to relax and unwind most of her life because she is the boss of the ant colony.

The Queens and Males Are Produced A Lot

The queens and males are created about one time yearly and the queens derive from larvae that consumed numerous amounts of a secretion that contains nutrition. The workers feed them that.

The males are brought about from eggs that were not fertilized.

The Queens and Males Take Flight

Queens and males get wings so they find time to depart the colonies, and they travel in the form of swarms. Each swarm is of all queens or all male ants and they search for other ants that are from other colonies to breed with.

Fresh Ant Communities Are Made Quite Often

After copulation, the queens will go to land and their wings will disconnect naturally. Then the queens find spots to lay their eggs. Each queen has the ability to lay plenty of fertilized eggs after each copulation. Their unfertilized eggs are put somewhere in the spring and summer seasons. The queen will search for a location to live, create her own chamber, then put down eggs gently. She shows care to the eggs.

She will let her babies consume her spit for nourishment. She will not eat when doing that for them because her body takes in the wing muscles that are not needed anymore.

The Queens Are the Only Ones That Can Have Children

The queen can release from 800 eggs to 1,500 daily. So the queens can have a life span slightly over one year. She is certainly the sole child-bearer with the colony.

Some Things That Goes In the Colony

So the queen get a chamber to herself, the babies are cared for in special chambers, and the food is located in other ones. The workers append more chambers, tunnels, and rooms, to make the colony become much larger and accommodating. Eggs will become larvae, then pupae and then grownups.

They Have Ways to Tell Each Other Apart

The little black ants can tell each other apart from the way that that each smell. Each colony have a certain smell that is on every member of it. So they immediately know when intruders infiltrate.

Each Little Black Ant Has 3 Segments

The little black ant have a head, thorax, and the gaster. The slim pedicel connects the thorax and gaster. The pedicel could have 1 or 2 nodes that stick out. Those nodes are inspected to put a name to each species of ant so that they can be dealt with accordingly.

The ants' normal tendencies, favorite spots to develop colonies, and favorite foods to thoroughly eradicate them. Then they need to pinpoint the nests to terminate the source of the little black ants.

They Have No Ears but They Have Compound Eyes

Ants are born without ears so they rely on their antennas which are sense organs. They utilize those most of the time to smell, hear, and touch stuff. Since that is the case, the little black ants discover and savor food.

The antennas also assist them in identifying and tapping each other plus uncovering paths. Each ant have 2 compound eyes that contains a lot of lenses. So they view things shattered up and they witness moves much more than shapes.

The Little Black Ant Can Become Prey Too

The little black ants become prey also due to the quantity of them and their miniature sizes. The other insects will make them breakfast, lunch, and dinner. So will miscellaneous mammals, reptiles, fish, and even some plants.