Home › Blog › The Life And Times Of The Pavement Ant

The Life And Times Of The Pavement Ant

Ants are one of the great anomalies in nature. They appear so small, but it belies the strength they are capable of. While many people are turned off by ants, especially when they interrupt a picnic or a day at the park, but they’re an important part of keeping nature in balance. The pavement ant is a common species of ant, and has its own unique history. 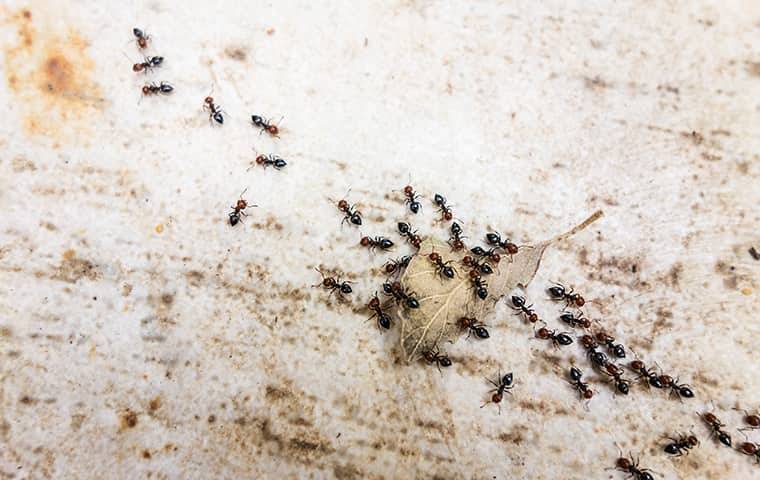 History Of The Pavement Ant

If you’ve ever encountered an ant in your life, it was probably a pavement ant. They are one of the most commonly encountered ants that enter homes on the east coast, after they most likely arrived in the United States on boats coming over from Europe in the 1700s and 1800s. The pavement ant is a soil-dwelling creature, and when the soil from those ships arrived in the U.S., they arrived as well.

Over time, the pavement ant has travelled across the United States via soil, distributing itself throughout the Mid-Atlantic, South and West regions of the country.

Some of the pavement ants have wings attached, and they are about twice the size of a normal pavement ant. They want to distinguish a male from a female is in the spine, which are visible on the females but not on the males.

There is not a lot of information to be found about the colony biology of the pavement ants. In most cases, what we have determined about them have come from observing them in their natural habitats and watching how they move and function.

The reproductive ants that have wings are generally found swarming in the spring, but if the ants are being held in a type of heated structure, they will emerge at all times of year as long as they can feel the warmth. Once they do emerge, you will notice the ants beginning to mate almost immediately, and the queen will take the eggs and burrow them into the soil. Two to three months later, new worker ants will come out of the soil and the cycle of life continues for the colony.

Like most creatures that need soil to survive, you’re most likely to see pavement ants building their nests under sidewalks, near large rocks or underneath large buildings. Not only do these areas provide the necessary soil, they also provide a certain amount of protection, so the colonies aren’t being left open and vulnerable. Pavement ants have also been known to move through the plumbing of a home, as well as electrical wires.

It is not uncommon to see the sand piles ants are known for in these areas, as well as small particles of soil that have been collected and placed in cracks of foundation walls or inside of slabs of concrete the ants can easily move in and out of. Ants will lay out debris from various excavated nests and create similar piles to the ones they’ve created before in new places. This process is often done in the warmer months and in the cracks in sidewalks and such. Colonies can also be found frequently near water, which is beneficial for ants that have a tendency to be drawn to hot weather.

Just like groups of almost everything living thing, pavement ants are known to fight. If one colony is built adjacent to another, the ants in both colonies will begin fighting. They will produce a type of spectacular ant war on the sidewalk, especially in the spring time months. Its part about protecting their queen and their own territory, and it’s part about the nature of living things wanting to battle against perceived enemies, even if no threat is ultimately being presented at the time.

Most frequently, this species of ant wants to eat at night, likely because it’s safer to go foraging for food in the evening hours when other predators aren’t able to see them as easily. Pavement ants have a varied diet, more so than you might expect for an insect. Anything they’re presented with that is sweet, like sugars, fruits, syrups or a variety of nectars, will be happily taken in and enjoyed. If the pavement ants find things like dead insects, pockets of grease or small seeds in their working, they will collect and store these in their nests.

Really any morsel of food they can get their hands on they can ultimately find a use for, whether it’s for fuel or for building their nests further.

Management Of The Ants

In order to control the population of pavement ants if you encounter one is through the use of baits. The ants carry baited materials they find back to their nest, which will ultimately eliminate it. Several different types of baits can be used, but anything containing slower acting acids do not kill the worker ants before they have a chance to share the baits with the queen of the colony and the other more immature ants.

For all of your ant problems, Alliance Pest Services has ant control plan for your home or office.