Home › Blog › Termites on the East Coast: A Layman's Guide to Termites

Termites on the East Coast: A Layman's Guide to Termites

By far, the most common species of termite throughout the whole of North America, specifically on the Eastern Coast, is the eastern subterranean termite (Reticulitermes flavipes). Most commonly classified as a pest the eastern subterranean termite often invade the wooden apparatuses within homes most exposed to soil. They makeup roughly 80 percent of the $2.2 billion spent annually on termite control alone and remain a problem because they feed on wood cellulose, destabilizing foundations and often going unnoticed for extended periods of time. Of course, they aren't the only type of termite to be found on the eastern coast, all three of the most common, North American termites, the Formosan, the subterranean, and the drywood termite, respectively, can all be found, at some point, along the eastern coast, specifically in Florida which is very heavily populated by all three types of termite. 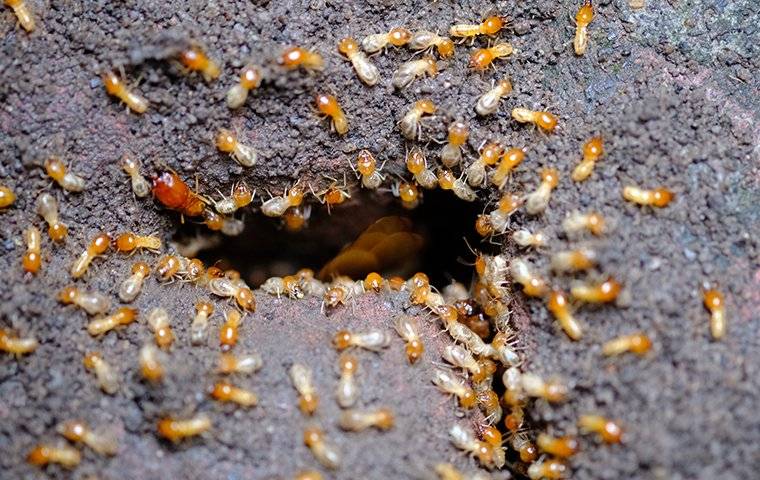 The difference between the three different types is various but let’s go through all the major differences, starting with the most common kind, the subterranean termite.

Then there is the Drywood termite. The Drywood termite lives in dry wood and, unlike most other species of termite, do not require direct contact with the soil to survive and can live indefinitely (until they die) in the wood they have chosen as their colony. The dry wood termite, in particular, can survive dry periods for long stretches of time since they get all the water they need from the wood they ingest.

Next is the most destructive and largest of all the termites, the Formosan termite, so named for Formosa (also known as Taiwan). They are markedly larger than other species of termites and build extraordinarily large colonies. While the more common subterranean termite colonies might number some several hundred thousand the Formosan termite colony typically averages around several million and extended three hundred feet into the soil for foraging purposes. They've been dubbed the “Super Termite,” because of both their size and destructive capacity.

Well now that you know a little bit more about what you are up against you will likely be asking the question, “What can I do about it?” An excellent question, of course, deserves an excellent answer and the best one is simply, “Don't let them in to begin with.” Understanding how termites penetrate into your home is the best way to stop them from doing so; much better to stop an infestation before it begins than catch it too late and go through all the steps needed to remove them.

First, find all the spots in your home where raw wood is exposed to the soil; these will be the number one spots that termites use to access your house. Other vulnerable areas typically include but aren't limited to cracked seals, exposed insulation (leading them straight into your precious wooden frames), windows open for extended periods of time, and general poor foundations.

If, however, you already have an infestation of one of these types of termites there are a few measures you can take to minimize your losses. First and foremost among them, call an expert. Sometimes people think that you can just smoke bomb an insect and they'll be gone for good. This isn't always the case and termites and quite resilient and hard creatures, so make sure you consult an expert before you take any drastic action that might put yourself and your house at risk.

There are four major and common ways of controlling an infestation of termites should one be detected, make sure you consult your pest control expert before deciding which would work best for you.

Method one: Entire Structure Treatment sometimes referred to as the “Tent treatment,” because it involves erecting a large tent around your home or area of business and fumigating the entire structure with a gas lethal to the termites within. Typically only used for extremely severe, full structure infestations.

Method two: Wood treatment. Wood treatment is odorless and quickly effective and typically prevents further invasions. The method involves chemical injections directly into the wood, ridding you of termites and preventing them from recurring at some point in the future.

Method three: Liquid Application, Monitor, and Bait. This method involves having a pest control expert place monitoring systems around the areas of your house where the termites enter and exit the most. Once these areas have been determined the pest control expert will then replace these monitors with bait stations that will lure the termites and trap and kill them. A fairly uncomplicated and clean method.

Method four: Liquid application with repellent. Often these treatment chemicals can be injected directly into an infested area and will cause the termites to leave. This option is best if you want as little aftermath from the treatment as possible (such as insect carcasses).

Well, those are all the main ways to control your pest problem, and remember if notice anything askew in your woodworking, call your local pest control expert!