You may have heard jokes about termites, but these pests are no laughing matter. In fact, potential termite infestation should be a serious concern. Alliance Pest Control can help you eradicate termites from your home, and prevent them from causing further damage. 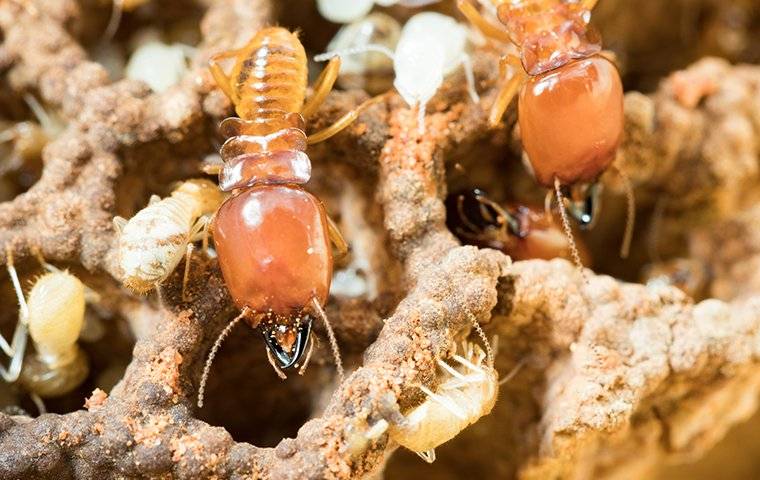 Termites (known as “white ants” in some parts of the world) are invasive insects that feed on dead plant material. They survive because of cellulose, which is a material commonly found in most plant fibers. Though termites have been known to eat leaves, soil, animal dung, and other materials, they usually feed on wood — regardless of whether it has been treated or not.

Like ants, termites live in colonies that can number from a few hundred to several million insects.

A 1968 study suggested that termites like rock n’ roll music, though it was later determined that the insects were actually responding to the vibration caused by the music, and not the type of music itself.

Why Should I Be Concerned?

Termites can cause devastating damage to a home’s structure in a short amount of time. In some extreme cases, the damage is so extensive that part (or all) of the home has to be razed and rebuilt.

In addition, like many pests, termites have the potential to transmit disease to humans and pets. It has been reported that kids, especially, could enjoy the nutty flavor of the insects.

How Can I Tell if I Have Termites?

Termites travel and eat in colonies. They often build structures comprised of soil, mud, wood, and other materials. These nests are often built underground, though some have also been constructed in the open air. Termites also build mounds, which can be easily seen by the naked eye. These are sometimes mistaken for ant hills, however.

If you are able to see a few termites, it is likely that thousands more are living close by… and eating your home! Deteriorating wood is also a sign of termites.

What Can I Do to Prevent Future Incidents?

To fully and completely eliminate termites from your property, it is important to contact a licensed pest control professional. The courteous and professional staff at Alliance Pest Control is always available to answer and address your questions and concerns.

Like you, we’ve lived, worked, and raised our families in the great state of New Jersey. We’re proud to have stayed family owned and operated for more than 30 years.