Termites live in large colonies, often establishing themselves in favorable spot for years. As the colony grows, it will eventually produce swarmers. These are winged termites that will leave the colony once it has gotten too large in order to establish a new colony somewhere else. 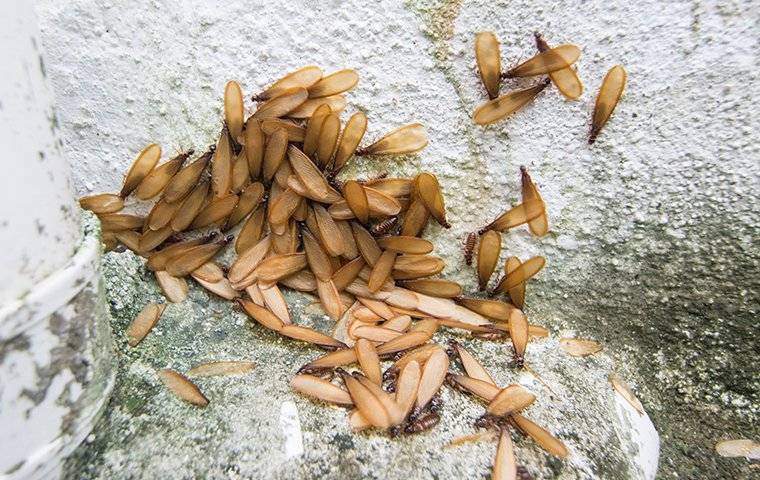 If you see a swarm of termites, you most likely have an established termite colony in or around your house. You should check carefully for any signs of termite damage around your home. Aside from the termite swarm, other signs that you might be hosting a colony include cracked or bubbling paint, wood that sounds hollow and mud tubes on walls or beams.

When a swarm of termites settles in a new location, they shed their wings. If you notice these shed wings lying around, you should contact an exterminator immediately. They are an excellent indication that you have a newly formed colony in your home and you need to get rid of them before they can do much damage.

If you notice a termite swarm leaving your home, the news is less good. As I said earlier, a termite swarm develops when the old colony has gotten too big and so a new colony splits off. It generally takes three to four years for a colony to get big enough to produce swarmers. Therefore, if you have a temporary swarm of insects in your home that you believe may have been termite swarmers that means that you have a very well established termite colony living somewhere very close by.

Termite swarmers and winged ants are often mistaken for each other. While it can be easy to confuse the two, there are a few easy ways to distinguish them. For starters, winged ants do not shed their wings. If you see a swarm of insects and later notice piles of wings lying around, it was a termite swarm. For absolute confirmation, you can send some of the wings to your local extension office. They will be able to give you a definite answer on what type of insect has swarmed your home.

Swarmers do not fly very far. Once they leave the old colony, they immediately begin looking for a new home, usually near fresh wood chippings. They shed their wings very quickly once reaching their new home. So if you see a swarm of insects that stays around for several days, they are winged ants. If the swarm disappears quickly, check for the shed termite wings to be sure that it moved on and didn't simply settle in.

If you can get a good look at the body of the flying insect swarming around your home, it is pretty easy to tell if you have termites or winged ants. Termite swarmers have two sets of wings that are the same size. They also have a straight waist and straight antennae. Winged ants also have two sets of wings, but the front pair is noticeably larger than the back pair. Their antennae are bent and they have a pinched waist. Remember, winged ants do not shed their wings so if you just find wings or if you find a lot of bodies that don't have wings, then you are looking at termites.

A swarm usually only forms in nice weather. If it is too cold or raining heavily, it is very unlikely that you will see a termite swarm. This does vary some from species to species. Some termites prefer wetter conditions than others, so a sunny day that seems perfect for swarming for you might be too dry for the termites you have.

Workers and soldiers find food and expand the colony's territory. As such, they are the ones who create the damage that a termite colony does to a home. Swarmers have no biting or chewing mouthparts, so they are physically incapable of destroying your home. Once they settle, however, they will immediately start breeding in order to grow their new colony.

What this means is that if you suspect that a termite swarm has settled in your home, there is no need to panic. For now, the termites you have in your home are harmless. You have time to shop around to find the best exterminator for your needs and your budget. You do not need to get rid of the termites today.

On the other hand, this is not something that you want to put off and forget about. Once a subterranean termite colony is established, they can live in their new home for years before noticeable damage starts to occur. You want to get rid of them well before this happens, especially as many home insurance policies do not cover termite damage.

A termite swarm is one of the most easily discovered signs of termites in your home. While they should not cause you to immediately panic, they are a good indication that something is not right. Call an exterminator as soon as possible to have your home examined for signs of a new or established termite colony.

Alliance Pest Services can take care of all your termite and ant problems.