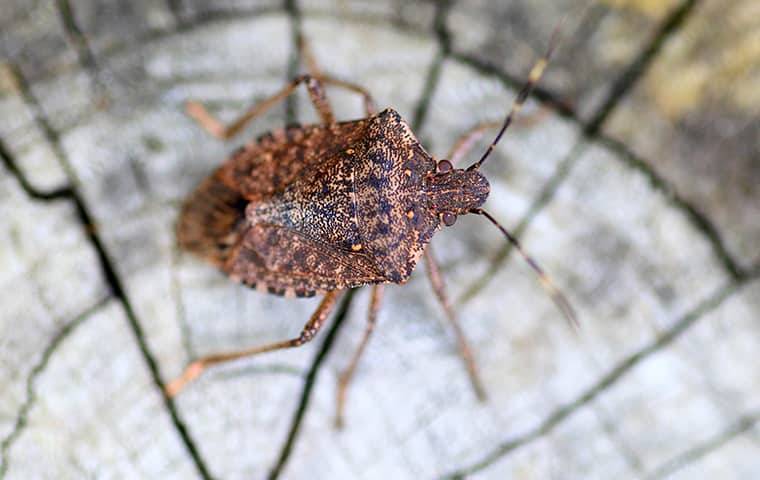 We have all heard the distinctive buzz click sound in our houses and know that a stink bug has come to room with us and is buzzing around our computer monitor or lights, looking for light and warmth. Luckily, they do not lay eggs or reproduce inside; they wait to mate until they can do it outside when it’s warmer. Nor do they eat household food or sting or bite. In fact, they are really the perfect house guest. So why are we usually so eager for them to leave? Well, they received their descriptive name for a reason- they emit an extremely, well, stinky smell when they are scared, disturbed or squashed. Even though fairly inoffensive guests, they can be found in dresser door, behind the drapes, crawling in cracks in window frames, hiding in vents, and even crawling on your trusty toothbrush. Anywhere there is an opening, there’s a good chance a stinkbug parked there. It’s often hard to avoid disturbing them or accidentally squashing them and thus experiencing that uniquely unpleasant odor.

And they are not leaving anytime soon. Officially known as the brown marmorated stinkbug, these pungent insect hitched a ride to the U.S. from Asia, landing in Pennsylvania in the early 90’s and were mostly mainly found in the Mid-Atlantic States. However, their range is expanding, and they have been spotted in over 40 states.

They pose a major problem to farmers and though they are most harmful to fruit growers, who lost more than $37 million in crops in 2010, they are also a pest for other crops such as soybeans and corn. They have no natural enemy to reduce their numbers although there has been research carried out into finding a pest – a tiny parasitic wasp from Asia that mainly subsists on stinkbugs- that can help reduce its numbers.

So what is a hapless homeowner to do to get rid of these harmless yet unwelcome guests? Caulking seems to be the answer. If you seal or caulk around windows and doors, this should help to eliminate the odiferous insect. Patch up any holes over one inch and place protective screens over air vents to prevent entry into the house. It is also recommended that you trim branches and shrubs and store firewood a minimum of 20 feet away from the house.

Vacuuming also works, but make sure to immediately empty the bag into a trash bag and dispose of it right away so the bugs don’t get out. There are also other natural ways to get rid of stinkbugs. Sprinkling diatomaceous earth, a sedimentary rock that works as a natural pesticide, is one way to discourage these pests from taking up residence. Sprinkle it on entryways such as windows and doors; it can also be sprinkled directly on any bugs that can be seen as well as in areas where they tend to gather.

Garlic is not only for vampires; it also works on this bug. Make a garlic spray with 2 cups of water and 4 teaspoons of garlic powder in a spray bottle. Spray the mixture onto areas where the bugs congregate and you should see a reduction in their numbers. It will not kill them; they don’t like the smell and will avoid any area it is near. You can also chop a garlic clove and leave pieces around areas they may frequent. Another natural substance that will help evict the tiny bugs is mint which, like garlic, acts as a natural repellant but will not kill them. Mix 2 cups of water with 10 drops of mint oil or two teaspoons of ground mint leaves in a spray bottle and use it on area where they are most plentiful.

Neem oil is another alternative. Spray them with a combination of 32 ounces of water with one to 2 teaspoons of neem oil and use this to coat houseplant leaves, windowsills and other hiding spots. It may take a week or so since this oil keeps the bugs from eating or mating and works on a more long term basis.

Although they have no natural enemy, some American animals are beginning to introduce stinkbugs into their diet, so take advantage of these predators such as parasitic flies, wasps, birds, toads, spiders and praying mantises by growing wildflowers and herbs which will attract them. Praying mantises can be bought from garden supply catalogs and pirate bugs, which consume the eggs of the stink bug, can also be found in garden suppliers. This way you can help reduce the numbers of this stinky pest while they are outside and beginning to reproduce and address the problem before they begin to start moving in with you during the cold months of winter.

“Bug zappers” or insect electrocution systems, work as well on stinkbugs as other insects if you set them up in an attic or other dark area, turn it on and night, and sweep up or vacuum any dead bugs in the morning. Place fly tape along entryways such as windowsills, doorways or other cracks and vents. Check the tape regularly and throw it away since the trapped stinkbugs may emit their special brand of scent after they are trapped in the tape.