Stinging insects such as yellow-jackets, wasps, hornets and bees, are pests that are common in summer periods which their stings can be very painful. Those who are allergic to stings are at higher risk, although someone can suffer if a large number of them swarm and sting at the same time. 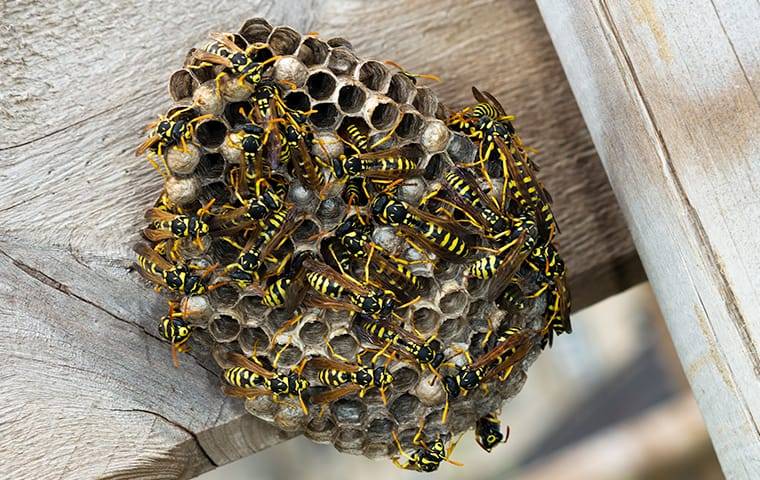 One way to protect yourself and your family from types of stinging insects, such as wasps and hornets this summer, is to ensure your properties are free of hives and nests. On a regular basis, go around outside your home, giving special consideration to the ledges, eaves, the bottom of the porches and the deck for nests. If you found a nest on your property, did not grope to remove it yourself. The colony can become a defensive and mass attack. Instead, contact a qualified pest control specialist who will be able to safely remove the hive.

Bumble bees are between ¼ - 1 inch in size, they have black and yellow spots, and a fuzzy appearance in general. Bumblebees build their nest out of pollen clumps, usually in the ground or a thick scrub grass, and often in an abandoned mouse nest. Bumblebees are considered useful, as an insect that pollinates flowers. However, they can sting. If the nest is located near a structure, then control is necessary.

Mud daubers are long and thin, usually black in color, and can have a metallic luster or pale marking. Mud daubers are single wasps and do not live in colonies. Mud daubers are considered useful insects because they control the spider. However, if their nest is close to human activity, management is a must.

The velvet ants are not ants, but wasp species. Female velvet ants are black and hairy, sometimes with areas of bright red, yellow, orange, or white. Males are usually less hairy, but they have wings, unlike females. Velvet ants often live in the types of nests used by wasps and bees that nest on the ground.

Paper wasp, a type of wasp species, is brownish with yellow spots or reddish markings. Wasp paper was named from the paper-like material, from which they build their nests. The nests often hung on twigs and branches of trees as well as porch ceilings, desk floor joints, railings, etc. If the nest is touched, there is a high probability that you will get stung. Paper wasps are considered useful insects because they control many kinds of insect pest. However, if their nest is near the building, control is warranted.

Carpenter bees are 1/2 - 1 inch in size. They look like a bumblebee, but the upper part of the abdomen is mostly bare and shiny. They do not live in nests or colonies. They make holes into wood, where they make tunnels for raising children. They prefer the decomposition or aged wood than a new or painted wood. Carpenter bees represent a serious hazard and can cause structural damage over time if they are not removed. The female carpenter bees have a powerful bite that is rarely used.

Bees range from 1 / 2-5 / 8 inches in size and are orange-brown or black in color. Bees are social insects, and live in colonies like hives, with mature colonies of 20,000 to 80,000 individuals. Bees are peaceful and do not look for something to attack rather they defend themselves and will backfire only what appears to threaten the colony.

Bald-faced Hornets are mostly black, with a white face mostly. Hornets are daring to build aerial nests in a paper box. Nests are usually found in open spaces, often in trees, lampposts, rocks or other structures. The nests can be large enough that grows to 14 inches in diameter and 24 inches in length. Bald-faced hornets are useful insects because they control many types of pests. However, if their nest is near the structure, control is necessary.

European hornets are large, between ¾ and more than 1 inch. They are brown with yellow stripes and abdominal pale face. European hornets build nests of cardboard, which are usually covered with a brown paper bag as protection. Nests can be found in tree hollows, barns, buildings, hollow walls of houses and attics. European hornets are considered useful insects because they control many types of pests. However, if their nest is near the structure, control is guaranteed.

Yellowjackets have a black and yellow color pattern, as well as between 3/8 - 5/8 inches in size. Yellowjackets live in nests built in a paper box that can grow to the size of basketball. The nest will contain a series of rounded paper honeycombs attached to each other and covered with a multitude of layers. Depending on the species, the nest may be close to the ground, Yellowjackets are slow sting unless their nests are tempered with. Yellowjackets are considered useful insects because they control many kinds of insect pests. However, if their nest is near the structure, control is warranted.

Remember that we do not recommend to attempt to remove stinging insect nest on your own which can be very dangerous. Instead, get a licensed pest professional to access your property and nest to determine the type of stinging insects (such as a wasp or other dangerous sting), and determine the best way to eliminate the threat to your family.

Call Alliance Pest Services today for all your bee and wasp pest problems.