Home › Blog › Pest Spotlight: What To Do About Stink Bugs In Monmouth County

Pest Spotlight: What To Do About Stink Bugs In Monmouth County

We like the interior of our homes to look nice, so we hang things like curtains on our windows, but the interior appeal can be marred when bugs are on the curtains! We work hard to keep the exterior clean, but that hard work is spoiled when there is a conglomeration of bugs on the side of the structure. Bugs found by Monmouth County homeowners on the side of homes in the fall and hanging on curtains inside the house are stink bugs.

If you have stink bugs infesting your dwelling, you need the Monmouth County pest control team from Alliance Pest Services. Our service specialists have been providing high-quality services since 1983; we know how to eradicate stink bugs from homes. 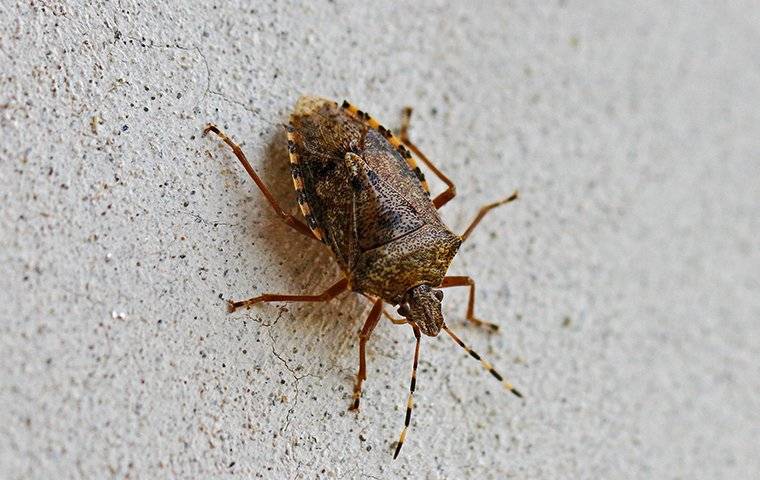 Ew! What Are Stink Bugs?

Stink bugs in New Jersey get their name because they release a foul-smelling odor when disturbed or crushed. Stink bugs are part of the Pentatomidae insect family with the following characteristics:

There are several variations of stink bugs, but the brown marmorated stink bug is one common to our area; these bugs appeared in Pennsylvania in 1996, and in 1999, we had our first sighting in New Jersey.

Bugs That Are Commonly Confused For Stink Bugs

People often call kissing bugs stink bugs because they have a similar shape and color; however, kissing bugs bite people's faces, whereas stink bugs do not inflict pain on people. Because some bugs, like the Western conifer seed bug, emit a foul odor when threatened, some assume they are stink bugs.

Boxelder bugs, which also release a nasty odor, are mistaken for stink bugs due to their similar body shape. Some mislabel assassin bugs as stink bugs because they both have brown bodies and rounded abdomens.

Some confuse other bugs like cockroaches with stink bugs because they produce a foul odor or have similar body structures or habits. If you are still unsure if you have stink bugs, you'd be wise to secure pest control for stink bugs in Monmouth County from Alliance Pest Services.

Why Do Stink Bugs Want To Be Inside Homes?

Stink bugs are outside homes feasting on plants and fruit from spring to late fall. A stink bug invasion begins when the temperatures drop in the late fall, and they relocate to the sunny side of structures. As the temperature outside declines and the days shorten, they find ways to get into the warmer house. Stink bugs enter Monmouth County homes through holes in screens, cracks around door and window frames, and electrical outlets.

When they enter the house, they hide for the winter under beds, behind baseboards, in the crawlspace, basement, and attic. Light attracts stink bugs, so as they seek hiding places, they will land on curtains, screens, and lampshades due to the light from these sources. When you see stink bugs or their eggs on window sills, around light sources, or in hiding areas, you have a stink bug infestation in your Monmouth County home.

Although they do not cause structural damage, bite, or spread disease, stink bugs are a nuisance pest for Monmouth County homeowners. They are troublesome because they can be destructive to plants and produce a stinky odor.

Alliance Pest Services is your source for stink bug removal in Monmouth County. Experts from our company will inspect your property, find the stink bug points of entry, develop a custom treatment strategy, and eliminate the stink bugs on your property. Contact us and request a free quote.