Of all social insects, ants are the most popular. When you think of an ant, the image of a worker collecting food automatically comes to mind. The workers are the most abundant breed of Ants. They are also the most visible, because they spend most of their lives collecting food outside the nest. The other castes usually go more unnoticed since they are less abundant and go outside less frequently. One of them is the caste of the sexed: males and females designed specifically to found new colonies. 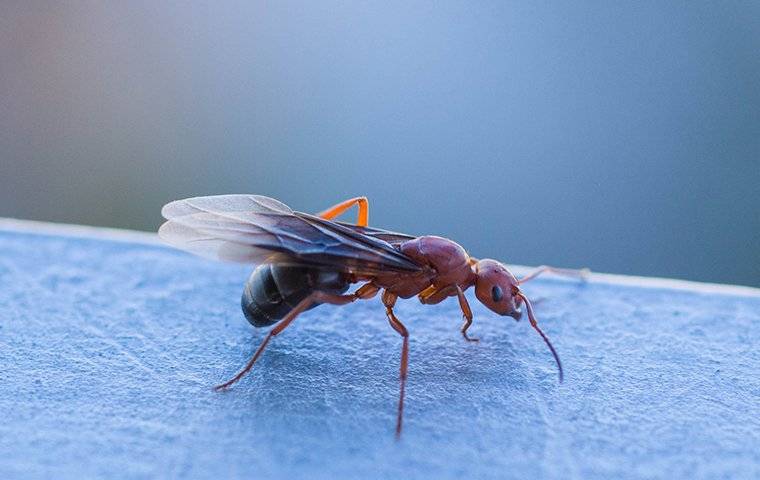 While the workers are apterous individuals (without wings), the sexed possess two pairs of wings. These wings allow them to leave the nest and perform what is known as nuptial flight or swarming.

However, in some species of ants, the nuptial flight has disappeared because the females have lost the ability to fly despite having wings. In these species, the queens are fertilized in the same nest by the males of the same colony, or sometimes, by males from neighboring colonies that enter the nest with the mission of fertilizing the young queens.

The nuptial flight or swarming consists of the massive exit of sexed (males and winged females) to the outside of the nest. This mechanism is usually triggered by a phenomenon of spring or autumn rains because the softening of the soil after the rains allow the queens to dig more easily the chamber where they will be locked to found the new colony.

During these flights, the females perform the copulation with the males and store the sperm in a structure known as the spermatheca, which is connected to the ovaries. The sperm stored during copulation is conserved throughout the life of the queen (which is sometimes more than 20 years), so fecundated females do not need to return to copulate with males never again in his life.

This situation is given as an adaptation to the low sexual potency of ant males. In most ant species, males are born with a fixed amount of sperm that gives them for one or a few inseminations. This is because shortly after hatching, the testes of males begin to degenerate. Faced with this situation, the females store the sperm after intercourse and dose it and preserve it throughout its life.

In fact, ant males usually die shortly after copulation, generating a significant difference between the longevity of the males and that of the females. Thus, for example, in the ant species, Ectatomma ruidum, the queens usually live about eight years while the males only seven days, and in leafcutter ants of the genus, Atta the queens live more than ten years and the males only three days. This implies that unlike other social insects such as termites, the ants do not have kings in the colonies, but only one or several fecundated queens that are responsible for laying eggs throughout their lives.

After the nuptial flight, the fecundated queens pluck their wings and bury themselves in a chamber excavated by themselves where they began to lay eggs, and with it, the beginning of a new colony.

In both cases, they are social insects with a colonial organization through castes. Also, both in termites and in ants, there are winged sexed castes that perform swarms or nuptial flights, and the massive exit of winged sexed in these swarms is done in both cases after spring or autumn rains. Therefore, it is very easy to confuse a swarm of ants with one of the termites. Although a priori a winged termite may look like a winged ant (both are black or dark, winged and of a comparable size), there are a few morphological differences that distinguish them.

One of the main differences between termites and winged ants is the morphology of the wings: in termites, the two pairs of wings are equally long, while in ants the second pair is shorter than the first.

Another difference is the shape of the antennas. In ants, the antennas are bent 90 degrees (what are known as layered antennas), while termites have straight antennas. Also, another difference that is not usually seen at a glance but that also differentiates them is the number of ocelli. The ocelli are small rounded structures with photoreceptor function (can capture differences in light intensity). Both the ants and the winged termites have them in the head, but there are three in the ants, and they are located in the upper part of the head in the form of an inverted triangle, while in the termites there are two and they are located next to the eyes.

Finally, the most obvious difference is the presence of petiole in the ants. The petiole is a small narrowing in the shape of a waist in the second abdominal segment of the ants. In contrast, termites have no petiole, so they have a wide body and no evident waist.

It is important to know how to distinguish winged termites from flying ants, because an infestation of termites is not the same as ants’ infestation since the methods and tools to eradicate their pests are different. Learn more about our home pest control and commercial pest control methods.