Home › Blog › How We Got Rid Of The Carpenter Ants

How We Got Rid Of The Carpenter Ants

One day I found a large ant under the computer table and threw it outside. I thought nothing of it. The next day I found another and then another.

About a week later, as I vacuumed way under the table right up against the wall there was a pile of dust; sawdust it seemed like. The window between the living room and computer room had rustic rough wood frames. I thought “How odd those frames are creating dust like that.” 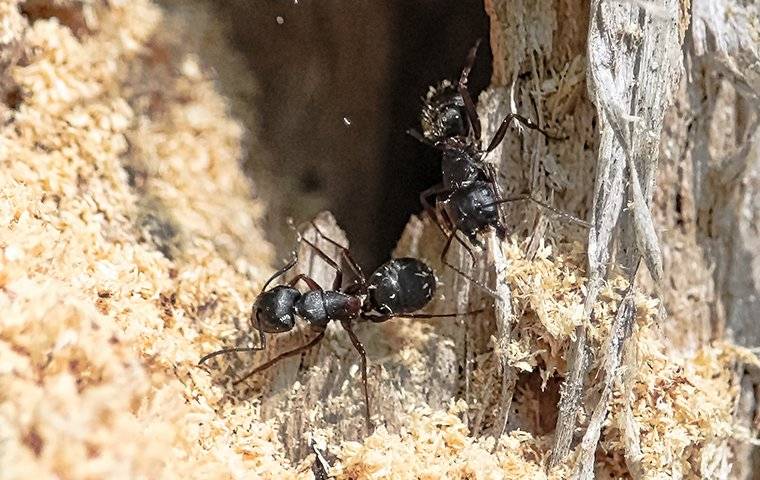 It took a while of more ants, more sawdust until I asked my husband to take a look. He removed a baseboard and discovered the whole area was a massive beehive of activity. Or, in this case an anthill of industry.

He sprayed the area with an insecticide we had on hand. We cleaned up all the dead ants. A few days later, there were more ants. I became worried that these ants were consuming our whole house, though the visible evidence was confined to the one area.

We decided to call a local exterminator to come and have a look. That’s when we learned about carpenter ants. Before that I had never heard of them. They actually don’t consume the wood as I had imagined, but they burrow in it for nests and tunnels. They can cause extensive structural damage. In our case it was confined to the one area and had not moved to any structural wood.

The exterminator checked all around the inside of the house. He crawled up into the attic and crawled under the house into the crawl space. He told us to store our firewood outside and to only bring it in when it was going to go directly into the fireplace.

He then took us outside and checked all around the outside of the house. He told us we had to move the stack of firewood away from the house and gave us other suggestions about maintaining the yard. His suggestions included keeping tree branches, garden hoses, landscape ties, and utility wires from giving the ants a route to follow into the home. He told us to avoid any piles of stuff in the yard and particularly near the house.

He then checked for any decaying structural wood on our house that was touching the soil as this would be easy access for the industrious ants.

The Exterminator asked us to take care of these things immediately before he returned to treat for the ants. He said doing all of those things first would improve our chances of a successful resolution to the problem. He then set a day to come and take care of these pests.

We were motivated to get rid of the pests so we followed all of his suggestions. We moved the firewood away from the house, my husband trimmed tree branches that were hanging close to the house and he put silicone tightly around every wire leading into the house. For a bonus, we never had a mouse in the house either after all this attention.

The day the exterminator came my husband, the dog and I had to be out of the house for three hours. There were a lot of dead ants to clean up when we got home. They were under the window on both sides of the wall where we had first noticed them. So, it seems they had tunneled right through that wall between the computer room and the dining room.

While the exterminator was there, he checked all of the work we had done outside of the house. He checked the crawl space, attic and the rest of the house to make sure the infestation hadn’t spread. Before the exterminator left he set a date to come back for a second visit based on the life cycle of the ants. He intended to kill the next batch to hatch. After the second visit there were dead ants to clean up once again but the number was a lot less.

We did not have any further trouble after the two visits. I am glad that we let an expert deal with it soon after discovering our problem. If my husband had kept removing that board and spraying the ants behind it, maybe I would still be cleaning up dead ants. And maybe I would have ended up with carpenter ants spread throughout the walls of the entire house. In my imagination I can hear them munching behind the walls.

Before calling the exterminator I learned that it’s very hard to get rid of carpenter ants. They create satellite nests and could be in attics, crawlspaces or anywhere in the house within the walls. Or, as in our case, chewing the wood frame around the windows and hiding behind that board. I am capable of crawling into the attic and into the crawlspace under the house but would I recognize the signs and locate the nests if I tried on my own? I could see the ants, but I couldn’t tell if they were leaving the nest or heading towards the nest. The experts have studied their habits and know how to figure out where the nest is by the way the ants are coming and going.

Getting rid of carpenter ants is a job for experts, in my opinion. It is not a DIY project.

Alliance Pest Services can treat for Carpenter Ants as well as all other species of ants for your home or business.