Home › Blog › Fleas & How They Are Attracted To Your Homes & Pets

Fleas & How They Are Attracted To Your Homes & Pets 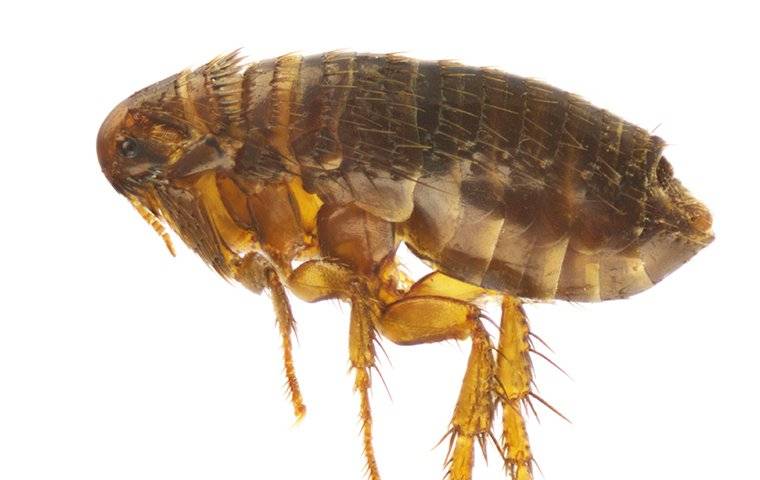 Fleas are pesky little ankle biters - literally. They are small but they pack a mean punch when they bite into your flesh or into your pets flesh particularly. They live and feed off of blood, using their mouth to pierce into skin. Fleas are wingless creatures, and there are several different species of fleas, but the most common are the cat flea, dog fleas and human fleas, as well as some more not named.

The most common fleas that infest our homes and animals are the cat flea and the dog flea. The human flea is rare, but is still one that affects many humans today.

One of the most abundant and widespread species of flea in the whole world. Adults range from 1-2 mm long and are a reddish brown color. The cat fleas’ primary host is the domestic cat, but can also latch onto domestic dogs also. This flea also lives on other carnivores.

The dog flea resides on domestic dogs, and even sometimes domestic cats. The dog flea can actually be more dangerous, carrying Dipylidium caninum, which is a flea tapeworm. This disease can also affect humans, as well as other animals in the household.

Despite the name, this flea can actually have a variety of hosts, including birds. This flea can also be quite dangerous carrying the same disease as the dog flea.

Fleas are usually 1/16 to 1/8 inch in size, and dark colored. Their mouth is like a tube, which is very much needed for sucking blood from their prey. A flea can actually jump up to 7 inches high, which makes the flea one of the best jumpers known out of all animals. This means the flea has very long legs to help produce high jumps.

The life cycle of a flea is quite simple. The female lays her eggs in batches of 20 or so, usually on the host. The eggs can take around two days to two weeks to hatch. Once emerged from their eggs, they begin to feed on vegetable matter, insects and feces. They are blind so they keep in small, dark areas. Once they have become pupae, which is right before adulthood as a flea, they begin weaving a silk cocoon within one to two weeks after. During this point they remain restful, sensing vibrations for when a host may be near. Two weeks later, this baby has turned into an adult. Now an adult flea, he or she will start seeking out prey to feast on. At this stage in a flea’s life, the only thing on their mind is blood and where they can get it next.

Fleas do not actually have muscles; they store energy in a protein called resilin. As everyone probably knows, a flea’s body is very tough, making it very hard to smash or step on one of these pests. You basically have to roll the flea in your fingers a dozen times, breaking his legs, which results in death.

HOW AND WHY ARE THEY ATTRACTED TO HOMES AND PETS?

Fleas are attracted to homes and pets simply because that is where their food supply is, in the bodies of mammals. Humans and animals alike are prone to flea bites which leave little red marks and bumps along the bodies. Since fleas feast off of blood, they are immediately attracted to our animals. The best way to reduce the risk of your animals getting fleas is to bathe them regularly. Although, that doesn't always prevent them from coming back -- especially if your cat or dog is an indoor/outdoor animal.

If your animal sleeps indoors but plays outdoors, this is the biggest and most common reason that your animal has fleas, and this is also how they bring fleas into your homes. Dogs and cats play outdoors until night time, then they come inside to eat and go to sleep and then before you know it, your precious little baby starts itching and scratching its skin and fur off. Fleas come from the animals that play outdoors and then come inside and fleas multiply quickly, so if you see a couple, be aware that there are plenty, plenty more.

Rest assured that although these pesky little creatures can bite and suck blood like a vampire, they do not carry aids.

Anti-itch creams containing antihistamines or hydrocortisone can usually treat a flea bite on a human.

You will need to find the flea ointments and treatments at your local vet or local pet store specifically for EITHER a cat or dog (DO NOT USE DOG OINTMENT ON CATS AND VICE VERSA). There are many different types of treatments that your animal can undergo such as pills, vet visits, using flea shampoos during baths, ointments and etc.

Killing off flea infestations in the home can truly be a battle. Since fleas multiply so quickly and have such tough "skin," it is much harder to rid of fleas then any other insect. However, it can be done.  Call Alliance Pest Services your local flea and tick control expert in Monmouth County, New Jersey.