Fleas are nasty little insects that affect all kinds of animals and even humans. Fleas are wingless insects that have mouths that are able to pierce skin and suck the blood out of animals. They are parasites that live on the outside of the body and live off the blood all kinds of mammals and all kinds of birds. There are 2,000 species of fleas all over the world but the most common ones are cat fleas, dog fleas, human fleas, Moorhen fleas, the northern rat flea, and the oriental rat flea. 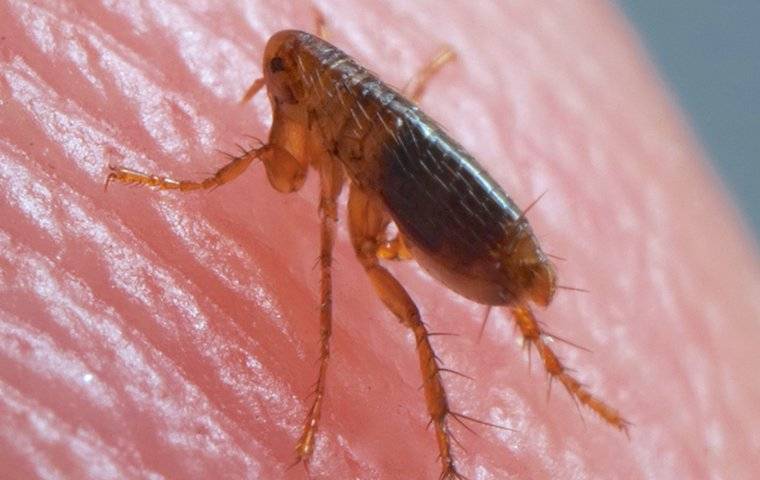 Like mentioned before fleas are wingless insects that are between 1.5 to 3.3 mm long. They are agile little insects that are typically dark in color and their mouths are in the shape of a tube to make it easier to drink the blood of whoever they land on. Fleas have very long legs and the back legs are made to do all the jumping. The average flea jump 7 inches vertically and 13 inches horizontally and this makes the flea the highest jump of all animals compared to its size.

The only animal that can jump higher compared to their size is the grasshopper. If human man that is 6 ft. tall would be able to jump 295 ft. long and 160 ft. high, this would be something incredible to see. A research was done at the University of Cambridge and that is located in England and the research found that fleas take off from their feet and not their knees. Fleas store up protein which is where they get their jumping power.

Their bodies are very hard, shiny, and are covered with tiny hairs all over and they also have short spines that help them move on to their host easier. Their bodies can handle a lot of pressure to help them stay alive against mashing, scratching, or squeezing them in your fingers. Squeezing them in your fingers is nearly impossible. Even though it may seem impossible to kill them with your fingers, there is one way to kill them. If you roll them back and forth several times it keeps their legs from moving and that will kill them.

Fleas lay microscopic eggs that can only be viewed by a magnifying glass. The eggs are very small and shaped like a worm. They are pale with bristles all over its body and don’t have eyes but it does have a mouth that is used for chewing. They feed on the feces of the adult fleas and the diet of adult fleas is mainly fresh blood from their host. Fleas have a very interesting lifecycle.

They go through four different lifecycles when they are eggs. An adult flea needs to drink the blood from their host before they are able to reproduce. The population is broken up into four different stages such as, eggs, larvae, pupae, and adulthood. The first stage of the lifecycle of the flea is the egg. After the female drinks the blood from their host they can then lay the eggs. The eggs are normally in batches of 20 eggs and much more at times. Since the eggs are laid on the host the eggs can easily roll off the host and onto the ground.

Fleas typically lay their eggs where the host rests and sleeps so that they can hatch and develop into adult fleas. The period it takes for the eggs to hatch is between 2 days and up to 2 weeks. The second stage is the larvae stage. The flea larvae come out of the egg so that they can eat anything that available such as dead insects, feces, and some form of vegetable matter. If the appetite is only blood from the host only 12% of the larvae mature into an adult. If they feed on anything else almost all of the larvae mature. The larvae are blind and they try to stay out of sunlight as much as possible. Some of the dark places that they find are sand, cracks, and bedding.

Pupae is the third stage of the lifecycle. If the larvae eat enough food they are able to weave a silken cocoon. This typically happens about 1 to 2 weeks after the larvae stage. After a couple more weeks the adult flea will come out and ready to find their host.

The final stage of a flea’s lifecycle is adulthood. The main goal of an adult flea is to find a host so they can drink their blood and then reproduce. An adult flea can live up to a year and female fleas can lie between 5,000 or more eggs in their lifetime. The perfect temperature for a flea to live is between 70 degrees F. and 85 degrees F. and the perfect humidity is 70%. Female fleas adventure out to lay their eggs and after about 12 days they come back to their mother.

The classification of the flea has been told they came from the fly species. As their evolution continued they developed more into their parasite niche. Once they have evolved into a parasite they lost their wings and their eyes become covered over. Even though many think that fleas evolved from the fly species more research is being done to find out which lineage they are classified in. With the research that has been done they have also been classified to be in other insect species but there is no definite proof yet.

If you are having a problem with fleas, contact Alliance Pest Services today to solve all of your flea problems.