Home › Blog › Creepy Crawlers That Will Keep You Up At Night: The Horsehair Worm

Creepy Crawlers That Will Keep You Up At Night: The Horsehair Worm

The horsehair worm is also known as the Gordian worm, and these creepy crawlers are every bit as incredible as the tall tale for which they have been named. Readers may be familiar with the story of the Gordian knot, or they may have heard the phrase "cut the Gordian knot."

Legend has it that Alexander the Great encountered the Gordian knot back in 333 BC. The Gordian knot was supposed to be unable to be untied. If someone were brave enough to tackle this task and succeed, they would then rule all of Asia. When Alexander sliced through the knot with relative ease with his sword, this set the stage for his eventual conquering of Asia minor. 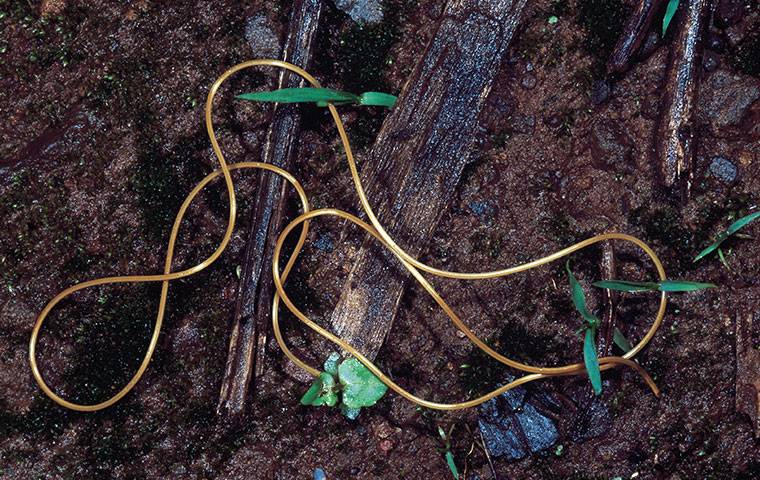 When it comes to the horsehair worm, this name is as terrifying as it is appropriate. The horsehair worm is a parasite that has earned its name with its clever tactics that will keep you up at night. These creatures resemble something out of a horror movie, and we're surprised no one has created a successful film franchise that is based on the fear that they create.

They receive the horsehair name because the parasite was once thought to resemble horsehair that becomes animated once it is exposed to water. Worst of all, there are over 300 known species in the world, and they are not going anywhere anytime soon. They invade the insects that they host and slowly develop a certain amount of mind control over the creatures.

Just imagine how terrifying it would be to have a mass of parasitic worms taking over your body and deciding your every move for you. This is the sad reality for the insects that these parasites decide to attack. By the time they pass away, they are essentially prisoners of their bodies. The process is truly scary.

Once the horsehair worm has taken over the thought process of the subject, they convince the insect that it is time to kill themselves. The insect then takes a deep dive into a body of water whether they want to or not. Of all the worst ways to die, drowning while you are being held captive inside of your own body must rank near the top of the list.

After the insect has taken its kamikaze dive, the horsehair worms end up in a tangled knot inside of the body. To escape, they bore holes in the insect's exoskeleton and make their way back to the surface. In some cases, the host is left alive and will die slowly after the horsehair worms have already moved on in search of a new host.

These worms can be found almost anywhere on the planet, and they continue to evolve. In fact, there are some who believe that these worms can latch onto human hosts in the same manner as an insect. For those who thought that they were safe because they are not insects, this is certainly a sobering thought that may keep them up at night.

A horsehair worm can become as heavy as the host that they have taken over. They will take over the bodily functions of their host and can even rewire their brain to do their bidding. Scientists who have studied the parasites say that humans will need to be on high alert soon enough.

Those who have taken the time to watch videos of these parasites entering the bodies of insects are brave souls. There are clips of these worms entering praying mantises and roaches, and when they emerge from their bodies, they leave nothing to chance. If this sounds like something out of the Alien franchise, this is not that far from the truth.

These parasites are found in any number of rivers and streams around the world, so there is no escaping their presence. Each mother lays a whopping 15 million eggs. After the worms are born, they begin their search for a host. Some of the worms will even pick a host that is likely to be eaten by an even larger host so that they will have the largest body to control.

Insects that have left the water and still have these parasites inside of their body only have so long before they become zombies of sorts. Once the horsehair worms have taken over the mind of the body that they inhabit, the creature will compulsively seek out water against its better judgment. The creatures become suicidal and cannonball themselves into the first body of water that they can locate.

To add to the horror movie aspect of things, these worms do not even have mouths. Scientists are at a loss as to how they can chew holes through the exoskeletons of their hosts. The idea of these worms simply forcing their way against the body of their host until they crack open like a clamshell is simply too disturbing to consider. Currently, it is the likeliest explanation, though.

The horsehair worm is only concerned with two things: breeding and mating. That's right; these worms are only on this planet to advance their sex life. After they have found their host, they burrow into the body cavity and begin to grow. The worm starts as a small larva before growing roughly a foot long. From there, this is when they begin to pump their neurotransmitters into the brain of the host so that they can take over the brain.

They do not have a digestive system, and it is believed that they simply absorb the nutrients that their host is consuming. After the parasite frees itself from the host, it finds a mate and completes their sole purpose in life. The female then lays her 15 million eggs, and the process begins anew.

Humans Can Be Targets

While these worms are not always considered to be a danger to humans, we regret to inform readers that there are documented cases of human infestation. Human cases tend to be less severe than animal cases, but these cases may continue to worsen as the horsehair worms evolve.

Humans may not be at serious risk because the horsehair worm would much rather target an invertebrate. However, this does not stop humans from accidentally consuming bugs that have become infected by these parasites. The human body does stand a better chance of being able to expel the worms more quickly, so this is somewhat of a silver lining.

Several Japanese citizens experienced such infestations and studies show that the average human victim is likely to regurgitate or defecate the worms before they have a chance to take over the brain. Either way, this does not sound like the most pleasant of experiences.

Their skin is tough enough to withstand the human digestive tract, and they will typically emerge alive and well even after the human has found a way to expel them. The corrosive nature of human stomach acid does not begin to faze these worms. They can survive in conditions that would kill off many other parasites.

This is a classic good news/bad news scenario for humans. Even if we do not have to worry about these worms taking over our bodies, forcing us to leap to our death and then boring a hole out of our brains before looking for a mate, there is no guarantee that these worms will not figure out a way to do so eventually.

The truly morbid readers out there might find this story fascinating. Others may find it to be rather terrifying. There is no denying that these worms have a horrifying lifespan. All we can do now is hope and pray that they never evolve to the point where they can take over a human host.