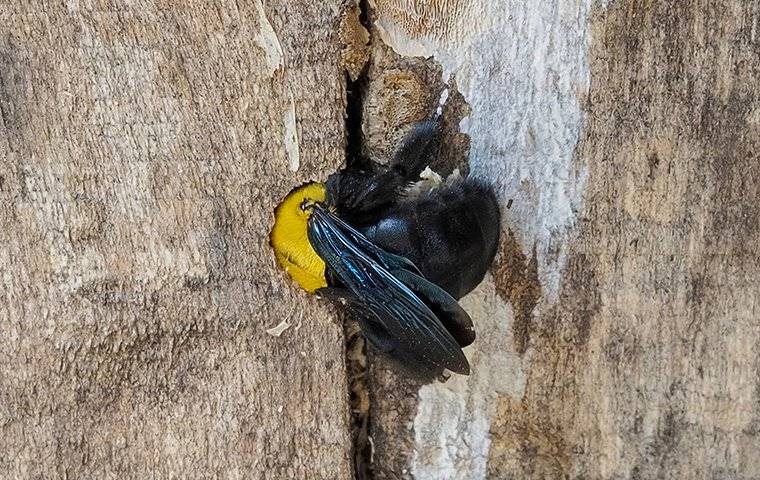 The typical carpenter bee are large, very resilient, shines in the sun, are black in color. There are some carpenter bees that have yellow marks on their head. Carpenter bees look very similar to the bumble bees, which makes people confused between the two. There are several species of the carpenter bee where the females will live with their daughters or sisters, which create a small social group all by themselves. The carpenter bees use little bits of wood to form walls to separate the cells in the nest.

Even though the tunnels in the nest are near the surface there is very little structural damage if any at all and this makes the carpenter bee a very smart insect when it comes to building nests with tunnels. Carpenter bees are great pollinators because they can go inside an open faced flower and get the nectar. There are also some carpenter bees that will make a small slit in the side of a flower and steal nectar from other carpenter bees. In the United States, there are two species from the east that are found and three species that are typically found in the west.

There are some species that are male that have either a white or a yellow face and the females that do not look like that. The males typically have larger eyes than the females. The male bees will often be found hovering around the nest to protect it from other animals. The male bees are typically harmless because they don’t have a stinger but the females on the other hand have a stinger so they have the ability to sting you and they will if they feel threatened.

Carpenter bees are typically solitary creatures although there are some species that have small and simple social nests and this is where mother and daughter bee normally stays. Even though they are typically solitary creatures their nests may be side by side. Sometimes the females will break up into groups and one group will stay motionless and protect the nest and the other group would go hunting for food.

When the carpenter bees make their nests they vibrate their bodies and make the tunnels in the nest. There is typically only one entrance to the nest and it’s a perfect circle and it is typically about 16 mm. The tunnels serve the purpose for nurseries for the baby bees and they are used to store the pollen and nectar that is collected by the bees. The size of the eggs are much larger compared to the size of the females and sometimes the eggs are much bigger than other insects. There are two different ways that male carpenter bees mate.

The male carpenter bees that have larger eyes either go searching for female bees or they hover around the nest and wait for a female to pass by. The other way that they can mate is for the bees with smaller eyes. They have a large gland reservoir and it releases pheromones into the air while they are flying around. The pheromones send out a signal to the females that a male is close by.

If you happen to get invaded by carpenter bees, call Alliance Pest Services today to solve all your pest and bee problems.