General Information Regarding the Lives of Carpenter Bees

Carpenter bees are a large family of bees with about 500 different subspecies, and about 31 sub genera. Their name comes from their tendency to excavate tunnels into wood for nesting purposes. They are most commonly noticed in late springtime or the beginning of summer. This is because they can be found hovering around the outside of homes. Usually these bees are searching for a suitable mate or looking for a good spot to build their next residence. The male carpenter bees lack a stinger, but make up for it with their aggressive personalities. Female carpenter bees on the other hand have very powerful and painful stingers but because of their docile nature will reserve its use for emergencies, such as when they are being handled or when they are making the pollen provisions for their eggs. 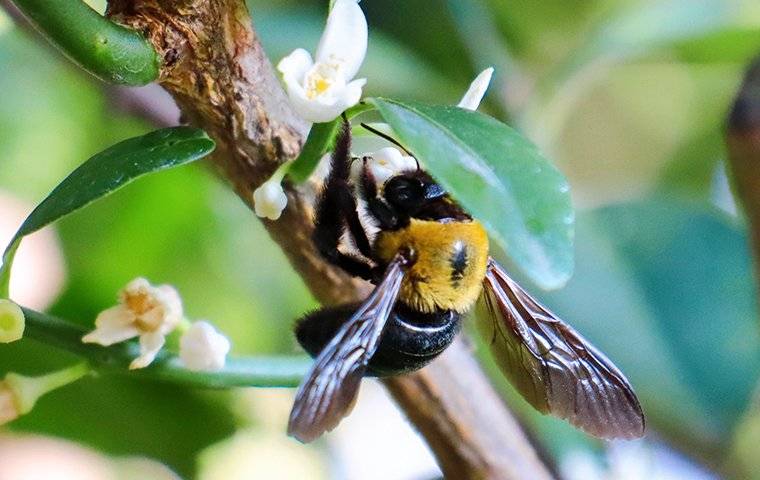 Carpenter bees also differ from bumble bee in the way they construct their abodes. While the common bumble bee colony will build their nest in the ground, carpenter bees prefer to lay their eggs in the tunnels they’ve drilled out. These bees will choose unpainted, bare, or worn softwoods over painted or pressure treated woods. Redwood, Cedar, Cypress and Pine woods are the perfect material for a carpenter bee’s home. Common places to look for a carpenter bee’s nest would be eaves, facia boards, window trim, wooden shakes, decks, paneled siding, and some outdoor furniture.

When the carpenter bees start coming out and finding mates, the fertilized females will dig separate tunnels into wood. Each tunnel has a perfectly circular entrance and is about the size of a dime. Another way to tell if the tunnel is from a carpenter bee is to look for sawdust (also known as frass) that is the color of fresh cut wood laying below the hole. You can also listen for burrowing sounds being emitted from the wood as well. After the females have completely excavated their nests they will lay their eggs there and then give each egg a ball of pollen to make it through the winter. The larvae will slowly feed off this pollen, and they will emerge from the tunnel as full grown adults at the end of the next summer. A female may make a new tunnel the next year, or she may just enlarge an old tunnel and reuse it.

Carpenter bees tend to be a solitary species, but some will form simple social groups. The females carpenter bees may live in communities of mothers, daughters, and sisters. They will use small pieces of wood to put up partitions between each cell in the nest for individual privacy. They also will set up a division of labor when they do cohabitate. Some bees may be responsible for nest laying, or foraging while another set will be responsible for colony guarding and excavating. After an extended period of time, wood that has been used for these nests and colonies may contain a considerable amount of damage. The subspecies of carpenter bees that are solitary will still build their nests close to one another. The usual chain of progression goes – the founding bee forages, build a nest, lays its egg, and guards them. Then when that generation hatches they will move on to their own nests. One subspecies, Xylocpa pubescens, may have both solitary or community nests.

The most effective method for keeping your home safe from carpenter bees would be to ensure that all exposed wood surfaces are painted. You can also choose to use a wood stain, varnish, or preservative – but these methods, while being somewhat sufficient, don’t guarantee protection. It is also advised to keep garages and outbuilding closed during the carpenter bee’s mating season.  To treat tunnels of wood that have already been dug out, you can also utilize an insecticide dust into the opening. After treatment is performed, it is best to leave the nest open so other bees can come in and out and spread the poison to one another. Then a few days later you can plug the tunnel with a wooden dowel covered in wood putty or carpenters glue. This will safeguard that area from future use as a carpenter bee’s nesting gallery.