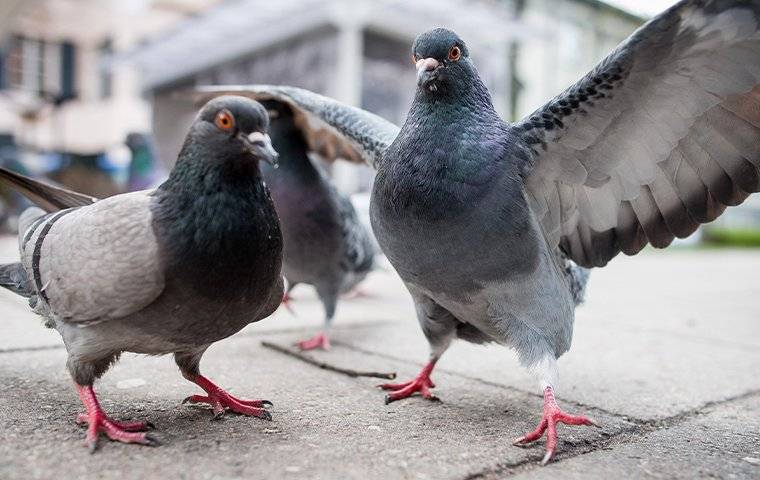 Warehouses, airports, hospitals, transportation and shopping centers are all equally susceptible to the damages that are caused by pest birds and those who own commercial buildings would do well to read on and learn more about the multitude of issues that are associated with their mere presence.

Birds who reside in commercial buildings tend to build their nests in particularly problematic areas. Rain gutters and roof corners are common refuge areas and when birds are allowed to live on the rooftops of warehouses and other commercial structures, they can cause collapses and drainage blocks. All it takes is one roof collapse to put a company completely out of business for good.

The continued residence of pest birds can do a great deal of damage to a building's machinery, as their droppings are acidic in nature. Birds will also choose to build their nests inside of machinery, which causes untimely malfunctions to take place. The materials that are used to create the nests are flammable, which greatly increases the risk of a potential fire.

Any automobiles that are parked in the vicinity of a commercial building of a building that is infested with pest birds is at risk of being damaged. Bird droppings eat into the protective layers of paint on the automobile and once this initial layer has been compromised, there may also be additional structural damage to the vehicle itself. If droppings are allowed to rest on top of the paint for lengthy periods of time, there is no telling just how much damage will be done.

While there are plenty of reasons to pay attention to the damage that pest birds can cause with their nesting and they are a common catalyst for roof collapse, their droppings serve as the biggest form of danger.

The general public tends to allow their affection for birds to overshadow their cautiousness and when these two factors combine, health risks are multiplied exponentially. The spread of disease becomes an even greater issue, especially when commercial building owners do not take the correct steps to eradicate the issue.

Let's take a closer look at all the problems that bird droppings can cause for warehouses, airports, hospitals, transportation, shopping centers and other associated structures.

The Spread of Disease

Viruses, fungi and bacteria can all be found in the droppings of pest birds and when these droppings are not cleared away in the proper or timely fashion, they can cause the spread of disease. Diseases need to be find a method of transportation in order to spread and thanks to birds, they now have the perfect conduit.

They are a mechanism for the spread of disease because of their ability to travel great distances while harboring parasites. While human interaction with these birds tends to be minimal, this does not account for the fact that they will come into contact with bird droppings at commercial buildings that are not properly maintained.

Contamination of Food and Water Sources

Diseased birds will commonly defecate into food and water sources that humans rely upon. If pest birds populations are not removed, they may defecate in local reservoirs as well, which places the entirety of the area's population at risk, in addition to the inhabitants of nearby commercial buildings.

If pest birds are found to have inhabited a commercial building, health inspectors may also choose to shut the establishment down for good, a problem that is difficult to recover from, especially from a word of mouth standpoint. Airborne spores also settle inside of vents and when this phenomenon takes place, inhabitants are at greater risk of developing food poisoning.

Even if inhabitants of a commercial building are not directly exposed to the droppings themselves, they are at risk of inhaling fecal dust. Once this fecal dust has been breathed in, it rests inside of the lungs, which provide a fertile breeding ground for these highly infectious agents. Internal infections of this nature can pass within days, but there are also instances where they are incurable.

Bird droppings are where vicious parasites typically roost and when these parasites linger outside of commercial buildings, they can bite random individuals and transmit a plethora of different bacterial agents. In certain instances, the parasites can even reside on the pest birds themselves. These parasites have been known to transmit a number of severe ailments and diseases, including meningitis and encephalitis. Bird control is crucial when it comes to exterminating these types of parasites and a commercial business owner should never rely on their own knowledge when it comes to matters like these.

Now that we understand more about the importance of protecting commercial buildings from the damages that pest birds can cause, the next step is enlisting the proper bird control professionals to do so. These professionals have the experience and know how that it takes to clean up these problems in an efficient manner, allowing your building to remain safe from structural damages, compromised machinery, adjacent automobile damage and the spread of potentially harmful bacteria and fungi that can spur the onset of disease.