Are Wasps In Monmouth County Dangerous?

Many of New Jersey’s stinging insects may look similar, but if there’s one pest you want to be able to identify, it’s the wasp. Wasps and bees may share the same black and yellow coloring, but wasps have thinner waists and pointed lower abdomens. 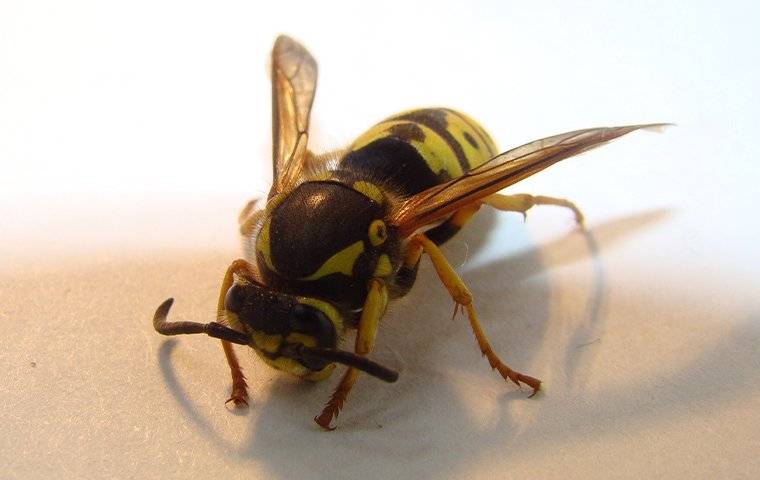 For homeowners in Monmouth County, here’s what you need to know about the dangers that wasps pose to you, how you can discourage them around your property, and what you should do if you find a wasp nest.

While wasps may not be a welcome sight on your property, they can be beneficial to the environment, especially if you have a garden. Wasps consume dead insects on your property and may help control your fly population as well.

However, as useful as they may be, wasps can also be dangerous to people and pets, especially if you’ve got an allergy to stinging insects. Not only are wasps aggressive defenders of their nests and colonies, but they don’t lose their stingers either – so these pests can sting you as many times as they’d like in a single attack.

In some cases, wasp stings can prove extremely dangerous even if you don’t have an allergy. Stumbling upon a wasp nest could elicit a swarm attack of hundreds of these pests at once. Since wasps often build their nests in hidden crevices, like under porches or on top of door frames, you may not realize you’ve stumbled upon a wasp nest until it’s too late.

How To Discourage Wasps On Your Monmouth County, New Jersey Property

The occasional wasp sighting is not unusual for New Jersey homeowners, but you don’t want to attract large numbers of these insects onto your property. There are a couple of different ways you can discourage wasps from building nests in or around your home, such as:

What To Do If You Discover A Wasp Nest On Your Monmouth County, New Jersey Property

It’s a common mistake for homeowners to try and remove a wasp nest on their own, but this can be extremely dangerous. Wasps can sting multiple times, and they won’t hesitate to defend their home if they believe you’re disturbing them.

Even nests that look inactive may not be as abandoned as they seem, and most homeowners lack the protective gear and training to deal with a wasp nest safely. Fortunately, this is where a professional pest service like Alliance Pest Services can lend a hand. At Alliance Pest Services, our goal is to safely remove any active wasp infestations on your property as well as prevent future ones.

If you’ve discovered a wasp nest or just suspect that there is one on your property, don’t hesitate to call us at Alliance Pest Services for further assistance today.