Dealing with any insect can be rather gross, but one kind of bug is especially disgusting because of the foul smell it emits when crushed. Known as stink bugs, this group of insects releases an odor that smells similar to rotting cilantro or skunk musk. And, while the exact scent can vary from person to person, it’s always strong and quite gross. 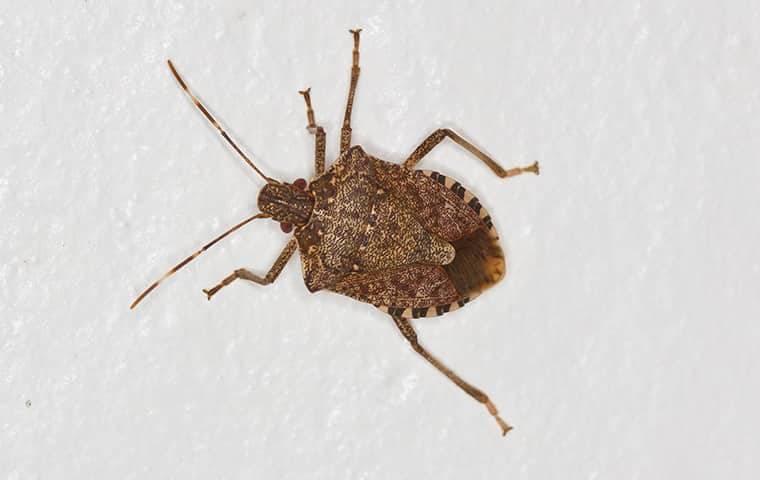 Because of this, stink bugs, even though they are mostly nuisance pests, can be particularly troublesome to have around your Monmouth County, New Jersey property. In this guide, you’ll learn everything you need to know about stink bugs and how to prevent them.

There are many different varieties of stink bugs, but the most prevalent in New Jersey is the brown marmorated stink bug. Though common, they are not native to the country. They were brought here in the mid-1990s and have become widespread ever since.

Brown marmorated stink bugs can be identified by the unique shape of their backs that looks similar to a shield. They are a mix of brown, grey, and tan colors in mottled patterns that allow them to blend into rocks and trees.

While normally found outdoors, these bugs will come inside as the weather gets cooler as they look for a place to spend the winter. Then, when the weather warms up again, they will come out of hiding and congregate in large numbers, usually around walls or windows facing the sun.

Are These Insects Dangerous At All?

While stink bugs are a harmless pest when it comes to health risks, they still aren’t good to have around. It’s true that they don’t spread diseases to people or pets, and they also aren’t known to really bite, but they are considered agricultural pests.

They can cause a good deal of damage to things like crops, and while this is mainly a concern for farmers, they can also cause damage to other plants. The other issue with stink bugs is that they will invade dwellings in large numbers. This makes them extremely invasive and difficult to remove, and, with their foul smell, they can be particularly gross to handle.

How Can You Prevent Stink Bugs?

Even if stink bugs aren’t dangerous and are unlikely to cause a lot of property damage for the average person, they can still be a huge hassle to remove. The best way to deal with these pests is to take steps to prevent them in the first place by following these tips:

These tips will help minimize the risk of stink bugs on your property but they are typically not enough to eliminate an existing population.

If you are having trouble removing stink bugs from around your property, the easiest way to get relief is with assistance from Alliance Pest Services. We have over 30 years of experience removing invasive pests like brown marmorated stink bugs, and we provide ongoing pest control plans to keep them from returning, too.

To find out more about the best option for protecting your property, give us a call today.