Home › Blog › Ants In Our Homes

Ants In Our Homes

Ants are among the most abundant insects in the world. It is estimated that there are about 7000 billion individuals in the entire planet, one million ants for each human being. Ants live in colonies organized through a system of castes or social divisions that provide a specific role to each type of individual. They present a holometabolous type of development in which the egg, larva, pupa and adult phases occur. Ant colonies are composed of three adult castes: workers, breeding females and breeding males. 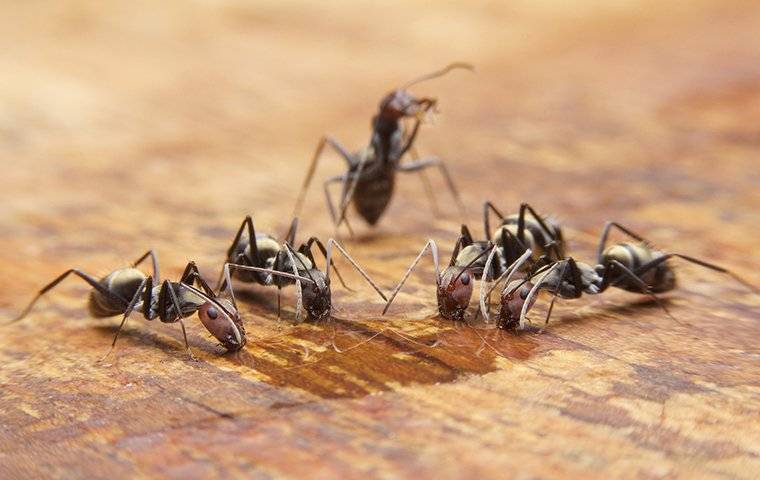 The workers are always females. In some species, they are completely sterile, while in others they can lay eggs without fertilization, which can lead to males, or simply function as "trophic eggs," that is, as food for the colony in cases of the scarcity of resources. The workers are responsible for feeding the colony, find food, build or rebuild the nest, protect it against enemies and take care of the laying (eggs, larvae, and pupae). There are species in which the workers specialize in different tasks to which they are morphologically adapted, for example, the soldier workers, who are larger in size and with a larger head and jaws.

The Ants queens are females with reproductive capacity. They are usually larger than the workers, with a much larger abdomen and well developed reproductive system. When they are virgins, they have two pairs of wings, but as soon as they are fertilized, they are torn off, which activates the development of the ovaries to lay eggs. Depending on the species, the nests may have a queen (monogamous colonies) or more than one queen (polygynous colonies).

In an ant colony, males only have a reproductive function. They have two pairs of wings, they are smaller than the queens, and always arise from unfertilized eggs. The mating with the queens can be produced either by swarming or nuptial flight or inside the same nest or neighboring nests without swarming. As soon as they reproduce, they die. A queen may contain sperm from several males, which she keeps throughout her life.

Ants are insects with a complex social structure
The ants appeared about 150 million years ago, and since then they have managed to adapt to almost all the environments of the world (except the poles and glaciers). The key to its success is the complexity of its social structure, unique in the animal world, and only comparable to that of the societies of termites and some species of bees and wasps.

They live in colonies formed by worker ants, one or several breeding individuals, eggs, larvae, and pupae. The number of individuals that form these colonies varies depending on the species and its degree of maturity, ranging from a few hundred to several million.

What Do Ants Look For Inside Houses?

The caste of the workers is the most abundant of the anthills, and one of their main tasks is to collect food for the colony. Most of the times, the ants that are observed wandering around the houses are workers in search of food. They can travel long distances from the nest.

Foods that are found by ants inside the home usually require massive recruitment of individuals. When a worker locates the food, it returns to the nest leaving a trace on the substrate of a chemical substance called a recruitment pheromone, which communicates to the other nestmates the exact location of the food found inside the house.

Then, the massive recruitment of workers begins, which quickly accumulate in large quantities in the food source.

Do Ants Come From Inside Or Outside Houses?

The best way to know if they come from outside or inside houses is to refrain from eliminating them as soon as they are detected and observe where they are going. Ants that nest inside houses can do so in different places depending on the species, although they tend to do so in areas with humidity, such as the kitchen or bathrooms.

In general, they can make their nests in false ceilings, under tiles, in pots of plants, behind boards or electric plates, between walls, under floors, or in wooden structures. Another unmistakable clue of nesting at home is the presence of large numbers of winged ants in the interior.

How To Fight Ants If You Have Them At Home

There are some preventive measures to fight an ant plague at home. A good way to combat the plague if the ants are introduced into the house from the outside is to seal any possible entry into the home, paying special attention to windows, doors, and cracks.

Another good way to prevent an ant plague from entering the house is to avoid possible sources of food. For this, it is essential to keep the waste in well-covered garbage cans and keep them always clean, not leaving dirty dishes or leftovers and keeping food properly stored, especially sugary products such as honey or sugar, or oily like butter or other greasy products, since they are very attractive to most species of ants. Also, if you have pets at home, it is very important to keep the food tight and the feeders away from the areas most frequented by ants.

The elimination of moisture sources also helps to combat domestic ant pests, since most species need moisture to avoid dehydration. Keeping the sink always dry, or the bathroom sinks can help restrict the sources of moisture available at home.

All these tips can be useful when the invasion is mild, but in cases of severe infestation inside the house, the best remedy is to contact a pest control technician. Since these experts have the necessary knowledge to control of ants, so they can plan a tailored treatment based on the scope of the invasion, the specific species of ant that causes the pest, and the location of the nests, which are determining factors for a quick and effective elimination of the problem.

We proudly serve Manalapan, New Jersey, along with many surrounding towns. Be sure to contact Alliance Pest Services for reliable service, but be sure to check out our service area to see if we can make it to where you are!