Ants in a Residential Home

One of the smallest beings on Earth is the ant, but just because ants are incredibly small, it doesn’t really mean they can’t be annoying. They outnumber humans by a LOT, and as such, they can be pretty much everywhere and most of the time, we don’t even notice them. What happens a lot of times, is that they can end up becoming guests in your home, and if that happens you surely need to get rid of them since they can represent a health hazard. 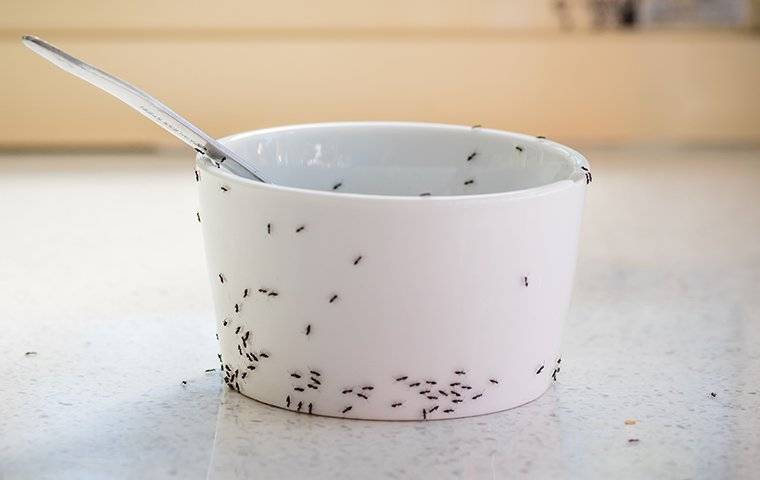 Ants are tiny and pretty much any hole they can get, they can use to get into your house. Anything from a poorly closed window to a small hole in your wall is good enough for an ant to get and get some food at your expense. There are several things you can do to stop them from getting into your home, however.

The first thing you need to do is to barricade your home. A good idea is to use caulk to cover small entry points such as cracks in the windows or in the doorways. This will not only keep the ants away, it will also provide your house a little more temperature control that will also lower your energy bill. Plus, it is definitely kid and pet safe, so using caulk is something everybody should do, regardless of conditions.

If an entry point is too big to cover with caulk (ants are really tiny, consider that) and you still know that ants are going to enter through that point, you can use substances that are going to keep them away but won’t harm anyone in the house. Among the list of substances you can use, the best ones are clearly salt and baby powder, since these won’t really harm anyone in your house, but they are certainly going to keep those annoying ants away.

It might also happen that ants keep on coming into your house, but you are simply unable to identify their entry point. They are tiny and your house might be bight, so getting everywhere is hard. No problem, as long as you have a suspicion about the place they are using to enter, you can still deal with the problem properly. You can apply scents that will keep the ants away, such as vinegar, peppermint oil, cinnamon, black pepper and bay leaves. Ants don’t like these scents, so they won’t bother you if your house has them.

If you just couldn’t keep them away at first and if now there are a lot of ants in your house, you will have to deal with the ones inside your house. Unfortunately, you can’t just ask the ants to leave your house; they won’t listen to you at all. So the first thing you will need to do is to eliminate the scouts. Lonely ants are sent by the colonies in order for them to identify food sources, so if you see a scout (lonely ant) somewhere in your house, you better kill it before the ants tells its friends about your kitchen and the amount of food in it. If they do call their friends, you need to get rid of them as well, but it just might be too late.

The ant colony is most likely placed outside, however, and as such they will end up following the scent trails back to your home over and over again. In order to get rid of these trails, you need to clean everything neatly. Just mix some rubbing alcohol, water and dish soap into a spray bottle and then make sure to spray it on the scent trails. Don’t wipe it off after you spray it, just let it be there for a while because the alcohol is going to make sure the ants don’t want anything to do with it.

If all else fails, however, you just might need to end up taking care of the ant colony as a whole. This is a solution that you should only take when things get really tough and when everything else has failed as well, since you are going to destroy an entire ant colony, and you are going to damage the ecological health of your garden.

The clearest and most effective way of getting rid of ants from the source is to find their nest and identify where they are coming from. Once you have identified them, you need to dig a little bit of the soil to open up the whole where they are coming from. When this is done, just go to the kitchen and boil a few liters of water. When the water is boiling, go back to the nest and pour the water inside. That is almost certainly going to take care of the entire colony, and soon the ants will have been eradicated from your garden.

If you are having problems with ants around your home, garden, office building or other structures, Alliance Pest Services is your New Jersey ant removal and control expert to solve all your ant problems.  Whether you have ants and are located in north Jersey or in central New Jersey, Alliance Pest Services has a local office to provide you with pest control services.