One of the Earth's most efficacious species, the ants have populated nearly every part of the world, adjusting to thrive in all environments except the Antarctica's ice fields. Out of over 12,500 identified species identified, the ants account for about 15% to 25% of the Earth's entire animal biomass. This makes them a part of the Earth's most productive species. Evolving from the ancient wasps over 120 million years ago, researchers attribute the ants' success to their exceedingly developed social organization, extraordinary adaptability as well as their highly-honed survival instincts. 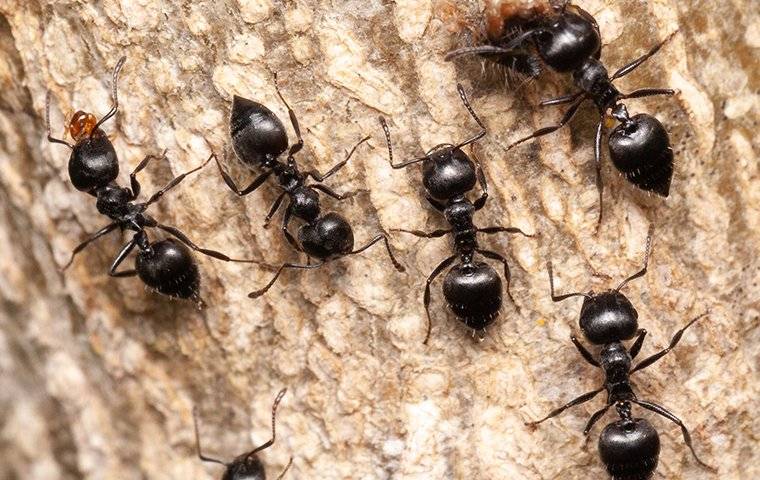 Like other insects, the ants play a significant role in nature. The creatures pollinate plants, ventilate the soil, eat other insects and recycle deceased organic material. It is when the ants overrun our homes that they are problematic. Human habitats give ants everything they need to survive including shelter, food, and water, thereby providing an attractant to foraging ants.

How to identify ants

Ants have six legs, with an elbowed antenna, and their bodies are divided into three separate segments. Their heads and large abdomens are divided by a thin thorax, giving the ants their characteristic "wasp waist" appearance. New Jersey ant species have different sizes from the 1/16-inch pharaoh ant down to the 3/4-inch carpenter ants.

These ants are yellow-brown to black and have shiny bodies with a darker heart-shaped abdomen. The acrobat ants are about 1/8 to ¼ inch long. The ants are named “Acrobat” because of their strange behavior when troubled of twisting their abdomen over their body like one carrying out a balancing act. The acrobat ants eat protein and sweets but prefer to eat aphid honeydew. They nest outdoors in rotting or damp wood in trees, decks, fences, and railings. When damp wood is available, they can move into the building and nest in the wall voids. Sprawling behavior can be noticed along utility lines and fence tops which acrobat ants follow into buildings. Different from carpenter ants, the acrobat ants don’t pose a threat to building structures. However, they are both aggressive and territorial. They also have a stinger, and emit a foul stench when threatened.

These ants are light to dark brown and are just 1/10 inches long with a slim profile. Argentine ants are uncommon in New Jersey, nonetheless have been coming north from the southern states and are well established in Maryland. The highly invasive ants live in super colonies, driving away the beneficial traditional ant species and acquiring their nests. Argentine ants eat almost anything including eggs, meat, oils, and fats. However, they prefer sweets, specifically aphid honeydew. Their numbers quickly reduce food supplies and force the colony to invade new territory continuously.

Unable to tunnel into compacted soil, Argentine ants nest close to the ground's surface or loose soil, leaf litter, mulch, and gravel, typically near structural foundations. The multi-nest colonies with several queens can be up to millions and even cover large areas with trails leading them out of the nest sites. The ants seldom nest in the house but can enter buildings to forage for food. They may not be dangerous to humans, but their overwhelming numbers and numerous nests make the ants an unbearable nuisance and problematic to eradicate.

America's biggest ant species, the carpenter ants have a dull black color. They are also ¼ to ¾ inch long. Within New Jersey, any big black ant is most likely a carpenter ant. They were named for their digging behavior, and the carpenter ants don’t ingest wood but can tunnel into it, and create large galleries on which they build nests. The large colonies can number up to tens of thousands may cause momentous structural damage to structures.

The ant is native to Europe but lives in North America as well. It was named after its behavior of living in pavements. They are known by their one-pair spines with two nodes on a petiole. It also has grooves on its head with a thorax. It is 2.5-4 mm long. They eat everything from cheese to nuts.

This ant is light brown or yellow and is 2mm long. It is notorious for its nuisance indoors and even infest hospitals as well. The ants are found in almost all continents on the globe. A single colony can inhabit a huge office block under six months. Elimination and control are often difficult as multiple colonies consolidate into lesser colonies during the extermination programs and repopulate later. The Pharaoh ants hazardous in hospitals, and they can access medical instruments, and cause the spread of infection as well as electrical interference.

Ant infestation can lead to serious damage and health problems. Below are some threats caused by ant infestation

Damage to the home

The carpenter ant specifically, causes some damage when it burrows tunnels through the house' wooden structures and makes the home a death trap. Other species such as damage appliances or even cause fire because of a short circuit.

Ants can also carry infectious bacteria which can cause serious ailments. The ants eat decomposing animals and plants. When they move to their feeding area, they carry harmful germs.

Ants like the pharaoh ants are known to carry the salmonella bacteria, and this can cause fatal infections.