Belonging to the same group as flies (Diptera), mosquitoes have one pair of wings in addition to a prominent appendage protruding from their heads which used for feeding, and long, thin legs. This prominent appendage is what separates mosquitoes from flies, and mosquitoes are usually larger on average. Adult mosquitoes range in size from three to nine millimeters and have wings and bodies covered in miniature scales.

Mosquito adults, both male, and female feed primarily on flower nectar. The adult mosquito is mostly nocturnal but will become active in shady, dark areas, or during days with significant cloud cover. Sunshine can cause the mosquito to become desiccated and perish, which is why mosquitoes are not active during sunny periods of the day. 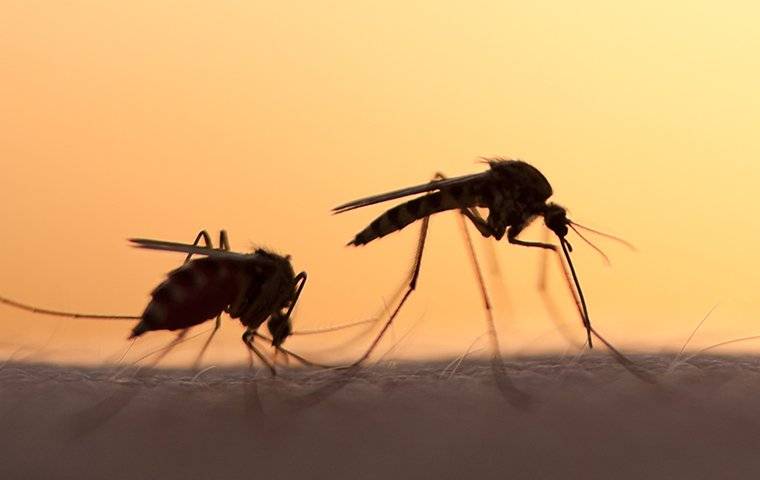 Males locate females for mating using their feathery antennae. Only female adult mosquitoes engage in the notorious behavior of feeding on blood, which assists them in producing their eggs. After feeding, the female mosquito will lay her eggs in any standing water, including birdbaths, buckets, mud puddles, and water collected in the bottom trays of houseplants and in watering cans. While the number of eggs laid varies depending on the species of mosquito, some female mosquitoes can lay over 100 eggs at a time.

Juvenile stages of mosquitoes usually live in the standing, often stagnant water where the eggs were laid. Mosquito larvae are called wigglers due to their wiggling motion once they hatch and begin swimming. Depending on the species, mosquito larvae can feed on anything from tiny aquatic organisms and organic flotsam to other mosquitoes. Once they finish feeding, wigglers molt into a different stage called tumblers (due again to the motion they make in the water), or pupae. Once adult mosquitoes emerge from the pupae, they must remain on the water’s surface until their exoskeleton is able to harden.

The dreaded mosquito bite is preceded by a high-pitched buzzing sound produced by the wings of the mosquito beating rapidly to keep it aloft. The bite of a mosquito doesn't hurt particularly, but the saliva of the female mosquito leave causes a reaction including a red bump with discomfort which can range from mild itching and irritation to swelling and intense inflammation. While some people can build up a resistance to the negative effects of mosquito saliva due to repeated exposure, other people can have or develop severe allergic reactions to the bites. Symptoms of an allergic reaction can include respiratory problems resembling asthma, blistering, and severe inflammation. In addition to causing annoyance and spreading discomfort at family gatherings, these pests can spread a variety of diseases, including dengue and yellow fevers, encephalitis, malaria, and West Nile Virus.

The Center for Disease Control and Prevention (CDC) recommends the use of insect repellents to prevent mosquito bites and reduce the spread of diseases often transmitted by them. Take care to avoid the eyes and mouth when applying repellents, especially when applying insect repellent to small children. There are repellents specifically made for children which are less likely to cause irritation after application.

If a person is a bit by a mosquito, the swelling can be reduced with a cold compress applied to the site of the bite. Anti-inching creams and mild oral antihistamines can help relieve itching. Ibuprofen, naproxen, or other anti-inflammatory medications can also provide some relief. Additional remedies include a paste created out of the water and baking soda and certain types of lotion. Be sure to speak with your doctor before taking new medications or treatments for Mosquito bites. If the remedies mentioned above do not provide relief or if more severe symptoms occur, seek medical attention right away.

Anyone who has spent a good length of time in areas prone to heavy mosquito populations has likely seen a bug zapper. These zappers are designed to eliminate pests, primarily mosquitoes, by attracting them to light and electrocuting them once they approach.  While these zappers are intended to be a tool for mosquito control, mosquito populations are not significantly affected by them.  Most insects killed by these devices are not mosquitoes, but moths and other insects attracted to light. These zappers are, however, effective in producing unpleasant sounds and frequently requiring time and effort to clean. They can also be dangerous to children and pets, and a fire hazard.

Even if the bug zapper is successful in killing a large number of mosquitoes, this effort still does not significantly affect the mosquito population. Flying adults are the only mosquitoes that are affected by the zappers, and they will quickly be replaced by maturing juveniles. A more effective approach to controlling mosquito populations would be to target their resting grounds and breeding areas.

There are productive steps you can take to reduce your mosquito population. Empty any containers indoors and outside which hold standing or stagnant water. This will eliminate prime breeding locations for mosquitoes and force them to seek locations further away from the residence. Make sure screens on doors and windows are intact to prevent mosquitoes from entering the residence. Wear long-sleeved shirts and long pants when going outdoors, especially in the early morning and early evening when mosquitoes are most active. Keep your swimming pool maintained and report abandoned pools to the local health department as pools that are not maintained are prime breeding grounds for mosquitoes. Be sure to use mosquito netting over infant carriers.

While these strategies and repellents can provide a temporary personal reprieve from mosquitoes, your local pest control professional can help you develop a comprehensive strategy to reduce your mosquito population.