A Homeowners Guide to Raccoons

Putting down that first payment on a dream home is not a feeling that a lot of homeowners could easily forget. There is a sense of joy, and a feeling of pride, that comes from moving into the perfect home in the perfect location. What can quickly turn this dream into a nightmare, however, is when your home unexpectedly takes on new tenants. Yes, I’m talking about the four-legged, furry, variety. 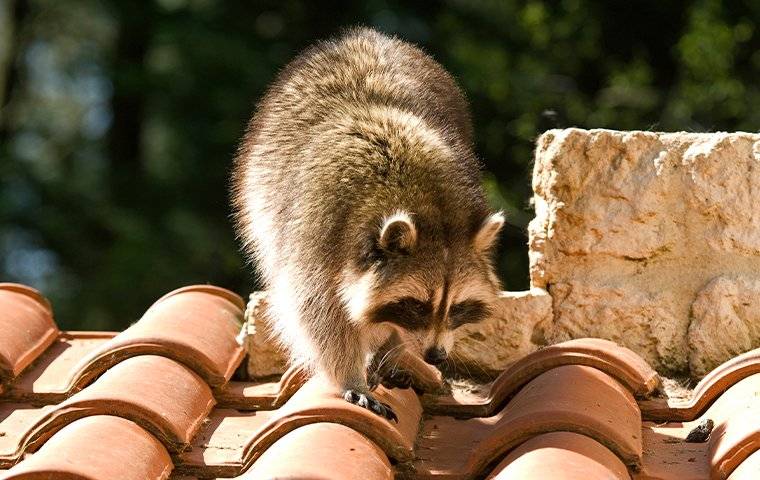 The prevalence of wildlife in a neighborhood is something that every homeowner should take into account before they move into a new location. Although it’s more common to have wildlife problems in rural areas, urban areas are certainly not immune.

Amongst the top offenders of wildlife you might see in your urban paradise? The masked bandits themselves: raccoons.

They are notorious trouble makers who have gotten a particularly bad rap for making disaster zones out of trash cans, creating havoc in the attics of houses, and creating nests in the rafters of any home they manage to sneak into. Raccoons, who primarily feed off of insects and grubs in the wild, are known to dig up entire front and back lawns when they’re on the hunt for something to eat.

Raccoons are nimble creatures with a lot of dexterity in their paws, which means they can do a lot of things that we generally wouldn’t think them capable of. Not only can they rifle through garbage cans, but they can unscrew jars, open door latches, and even tear the shingles off of houses. Their claws are able to tear through most common building materials, such as wood, brick, and aluminum, so any weak or rotting part of the home may offer a potential point of entry to a curious raccoon. Especially during the winter months.

If a mother raccoon has made a nest in or around your home, expect her to be very aggressive when it comes to protecting, and getting to, her young. The kits, who may be largely dormant when first born, often become more active and destructive as they grow.

The quicker the whole family unit can be removed from your home, the less damage you are likely to incur.

Not only can raccoons wrack up property damages, but they are also a significant health risk to humans. Raccoons are infamous carriers of rabies: a disease that is transferred through saliva, and that can be potentially deadly to humans if they are bitten.

If raccoons do manage to make their way into your home, it’s important that you take every necessary precaution in dealing with the problem. Even though a raccoon may appear to be normal, or non-threatening, it’s important to keep in mind that there are almost no observable differences when it comes to a raccoon carrying rabies versus a non-carrying raccoon.

Rabies can also be transmitted to other animals, so it’s important to take precautionary measures for any pets in your home as well.

Other than rabies, Baylisascaris is another medical condition that can be contracted by humans, and has a direct correlation to the presence of raccoons. The cause of this condition is when roundworms, which are commonly found in raccoon feces, are inadvertently ingested by humans.

It seems unlikely that something like this would happen, but if raccoon feces finds its way into your garden soil, the water system, or home-grown food, the effects can be dire. Roundworms cause extreme nausea, organ failure, blindness, seizures, and loss of muscle control. In extreme cases, it can even lead to death.

At this point, you might be asking yourself how you’ll know if your home is playing host to these nocturnal bandits.

Well, first off, you’ll more than likely be able to hear them during the night. Raccoons are vocal animals, and they move around frequently. If you have a warm and quiet space in your house, such as an attic, pay special attention to any noises that may be coming from there, as that is the type of space that raccoons generally nest in. The space under decks and patios, which are generally cooler during the summer months, are also common raccoon nesting grounds – so keep an eye out for any activity outside your home as well.

Secondly, you’ll probably be able to see the trail of evidence that they leave behind. Raccoons aren’t particularly subtle when it comes to leaving their mark on the world, but these things tend to get overlooked when we’re not actively searching them out. Whether its fur, feces, scratches on the floor, damaged shingles, or a pungent smell, raccoons generally leave some kind of marker showing where they’ve been.

Lastly, pay special attention to any wildlife complaints that your neighbors might be having. As they’re scavengers by nature, raccoons often have a multitude of sites where they build their dens. So if your neighbors are experiencing problems, it’s not out of the question that you might as well. Awareness is key.

If you know that these pesky critters have taken up residency in your home, or even if you simply suspect that they might have, it’s always better to let the wildlife professionals handle it. Wild animals of any variety can be dangerous, as their behavior if often unpredictable and they can be carriers of some very serious and debilitating diseases.

Get in contact with our local wildlife control center as soon as possible in order to ensure the safe removal and relocation of raccoons from your home.  Alliance Pest Services wildlife removal control experts in Monmouth County, New Jersey.